Two of Australia's most exciting young chefs, Analiese Gregory and Alana Sapwell, are joining forces for a close to sell-out Good Food Month event at Bar Rochford. Get in quick to book the last few tickets at goodfoodmonth.com We've managed to catch them both to find out a little more about the women forging a new path.

And Gregory was kind enough to share some recipes from her book How Wild Things Are, a homage to Tasmania which celebrates nature and the slow-food life on the rugged island.

What made you want to step into a professional kitchen? As a kid, I used to play kitchens instead of playing with barbies. Let's just say, even my parents couldn't pretend to love my food back then.

What's your go-to easy dinner at home? Pizza. I had my first "traditional" pizza when I was six. Unlike the traditional fast-food pizzas I'd previously had, this one blew my mind. That level of skill and respect shown in even the simplest of dishes made me realise that I wanted to learn how things were meant to be and not take shortcuts with my food.

What are three things always in your fridge? Anchovies, something green, Yuzu Kosho.

What do you like about Analiese? She creates thoughtful and delicious food. Analiese is always prepared for what it takes to lock in that special ingredient. Even if it means hunting, diving or hand picking it herself.

Know much about Canberra? It has an incredibly vibrant food and drink scene that is continuing to grow. 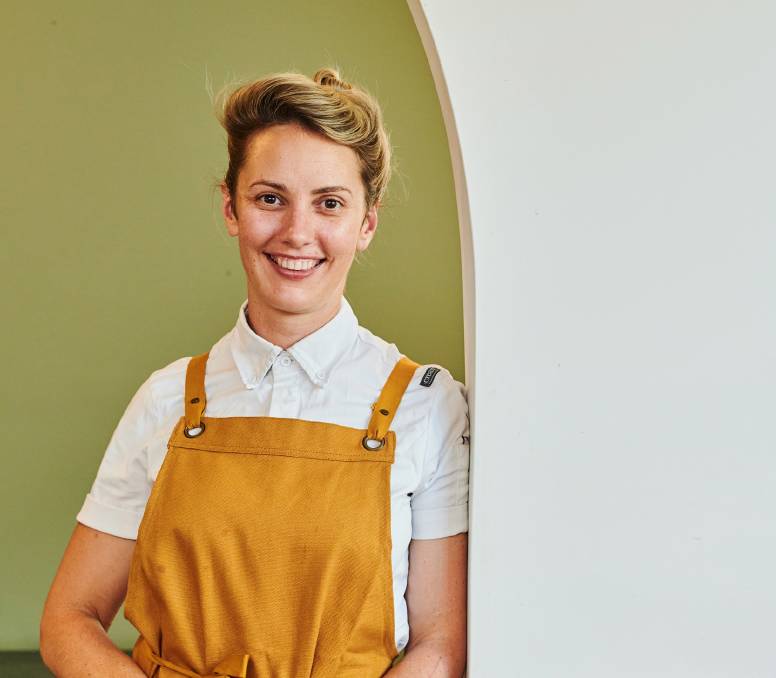 What made you want to step into a professional kitchen? I just really love working with my hands, there's something calming, involving and extremely satisfying about cooking. Plus the joy you receive from others when cooking for them.

What are three things always in your fridge? Butter, about 36 fermented condiments and anchovies.

What do you like about Alanna? I like her palate, her fearlessness and her approach to cooking, the kitchen and how to run one.

Know much about Canberra? I haven't been to Canberra since I was eight, so I'm really looking forward to returning. I feel like I have more and more friends who live there and are always extolling its virtues to me. This is one of my all-time favourite potato dishes, based on the pommes sarladaises we would make when I worked at The Ledbury in London. It was a once-a-week lunch special, cooked entirely on the stove. Every Sunday I would make five huge pans and spend the next hour constantly rotating them and freaking out about whether they would turn out nicely or be over-coloured. We made a woodfired version when I worked at Franklin, and people would often tell me it was the highlight of their meal.

2. In a small saucepan, melt the butter. Scrub the potatoes and slice them thinly, with a mandoline if you have one, about 2mm thick. Toss them in a bowl with the clarified butter and salt until completely coated.

3. Starting in the centre of the pan, lay the potato in concentric circles, each new slice overlapping the previous one by about two thirds. This is your presentation layer, so you want to make it as tidy as possible! Continue to layer the overlapping potatoes until the pan is full and you've used all the potato.

4. Place another square of baking paper on top, followed by a small round tray, ovenproof plate or even the lid of a pot to provide a bit of weight for pressing down the galette. Cook in the oven for one hour, or until a skewer inserted in the centre meets no resistance.

5. Once cooked, colour up the base on the stove or under the grill. For the stove method, place the pan on the stove over a low heat, checking the colour periodically. For the grill method, turn out the galette, invert it back into the pan, drizzle with olive oil and place under the grill until coloured. Serve immediately. If serving the next day, once cooked, skip the colouring step, place a small weight on top and press the galette in the fridge overnight. The next day, turn it out, cut into portions and colour the top in a high-heat oven or in a pan.

Tip: Potato galette is great as a side dish with any main course or as a vegetarian dish on its own. Some condiments I've served it with include garlic yoghurt, goat's curd, crème frache, pickled walnut mayonnaise, whipped cod roe, salsa verde, chutney or gravy. I've been experimenting with taking processed sugar out of some of my recipes and replacing it with more natural alternatives, such as honey and malt syrups. This is one of the recipes that adapted exceptionally well to honey, and I love the flavour the madeleines get from intense ones such as manuka and leatherwood. For me, these cakes are best served straight from the oven. They don't benefit from being kept for too long.

170g butter, plus some for brushing the metal mould

185g manuka or leatherwood honey, or other honey as preferred

1. Preheat the oven to 180C. Melt the butter and let cool to room temperature.

3. To make the jam, take the seeds out of the apricots, then roughly dice them. Combine with the water and honey in a saucepan and cook on a medium heat for approximately 10 minutes, or until a jammy consistency is reached.

4. Butter a madeleine mould with a pastry brush. I use a 12-cake non-stick metal one; the old copper madeleine moulds are amazing, but I would grease and flour them first. Fill each indentation half full and bake for 10 minutes. They should be set and golden, with minimal colour on top and light brown underneath.

Annette's tomatoes and peaches with honey vinegar and burrata curds

While Tasmania seems like an odd place to be growing tomatoes, it's here that I've had some of the best tomatoes of my life. One of my friends put me onto a grower in the north, Annette, who hosts a once-a-year tomato festival. She sends the tomatoes out, all at exactly the same stage of ripeness, in colour-coded boxes, and grows more than 100 varieties including reisetomate and the best purple tomatillos I've ever had. It's made me understand the beauty of the tomato salad.

1 bunch fresh herbs of your choice (basil, mint, lemon verbena, whatever you like)

1. For the burrata curds, pour the milk into a stainless-steel saucepan, add the citric acid dissolved in water and stir gently. Cook over a low heat, stirring very slowly, until the temperature comes up to 28C. Add the rennet mixed with water and stir for another 10 seconds. Remove from the heat, cover and let it set for 15 minutes. Test the curds for a clean break by making a vertical cut into them with a palette knife, then lifting them up to see how clean the cut is. Cut into 5cm squares. Put back on the heat and slowly agitate with your hand, breaking up any large pieces until they reach 40C. If you prefer the curds slightly drier, you can cook them out to 48C instead. Take them off the heat and let cool.

2. Once cool, drain the curds in a colander for one hour, then fold them with the crème frache and some salt to taste. Be very gentle so as not to overwork and whip the cream - it should look something like the inside of a ball of burrata. Keep in the fridge until needed.

3. Wash, core and slice the tomatoes, then put them in a bowl and season with the salt and honey vinegar. Let sit for 20 minutes. If using, remove the peach flesh from their kernels and cut into wedges, adding them and the olive oil to the bowl.

4. Spoon the cheese curds into a flat-bottomed bowl or onto a plate, then build the salad on top. Pour over some of the tomato juices and scatter with herbs. Once a year growing up, my family would decamp to Lake Taupo for trout season. This involved some atrociously bad fly fishing, sitting in rocky thermal heated streams and eventually taking a charter on the lake to actually catch some fish. As a 14-year-old interested in cooking, I smoked out many hotel rooms and set off countless fire alarms trying to smoke fish for my family. This is the method I use now, at work and at home. Once you get a feel for cooking the fish, it becomes a truly enjoyable thing to make.

1. In a bowl, mix the salt and sugar thoroughly. Sprinkle some into a tray. Put the clean fish down on top, then open the cavity and evenly sprinkle the inside with the curing mix. Pat the rest on top, then cover and refrigerate the fish for 12 hours or overnight.

2. Wash the cure off the fish, pat dry and leave on a tray in the fridge so the skin can dry, approximately six hours.

3. Preheat a smoker to 60C and use your choice of wood chips. In New Zealand, we would often use manuka, a native variety of tea tree. Once the chips are smoking and the chamber is preheated, lay the fish on an oiled rack (this will be important for removing it after). I cook it to an internal temperature of 58C so it is still extremely moist and the protein is just set, but you can take it higher if that is your preference.

Note: I have also done this many times in an oven. Just preheat to 58C, get a small tray of wood chips smoking and slide it into the bottom of the oven while your fish is in there. 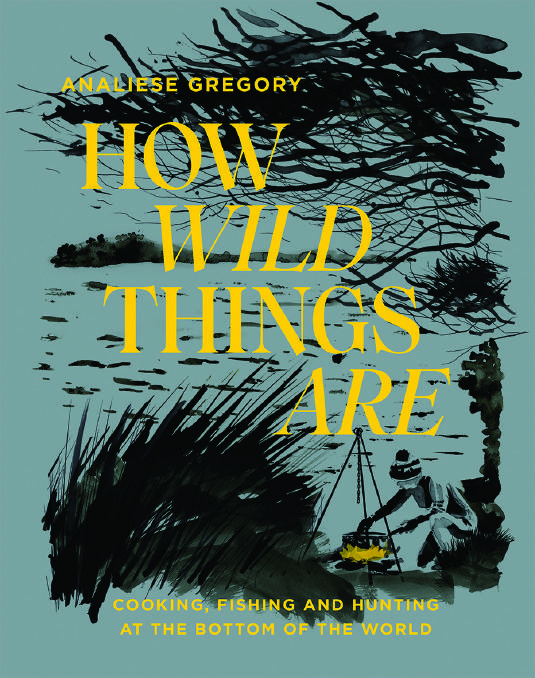 How Wild Things Are by Analiese Gregory. Hardie Grant Books, $45.

This story Celebrating the slow-food life with two of Australia's best young chefs first appeared on The Canberra Times.