UPDATED: MORE details have come to light about the car crash at Wyaralong Dam that claimed the lives of two children.

Inspector Douglas McDonald said the accident, which happened about 2pm yesterday, involved a 2001 Landrover Discovery with two adults and four children inside.

The family had been travelling from Pimpama to their home town near Warwick.

Senior Sergeant Ken Murray from Beaudesert police station said the accident occurred in the Boonah (Ipswich) police district but Beaudesert officers were first responders and had performed CPR on two of the children.

"I'm so proud our troops were able to respond in the first instance and we had two officers performing CPR on the children for about an hour," he said.

"This was a devastating event for the family and our hearts go out to them.

"Confronting a scene like that was hard on our officers too. It is something that will never be forgotten."

Inspector McDonald said the accident appeared to have occurred after the vehicle struck a wire road barrier on a relatively straight section of road in a 100km/h zone.

"The vehicle has then veered to the opposite side of the road and collided with a barrier, rolled down a stone embankment and came to rest on its roof in a semi-submerged position in Wyaralong Dam," he said.

"The adults were able to extract themselves and remove two of the children. Passing motorists stopped to assist but tragically the four-year-old female and 14-year-old male were unable to be revived."

Inspector McDonald said the injured occupants were taken to Brisbane Children's Hospital by air and road.

He said the one-year-old was in a stable condition and the five-week-old had not sustained serious injury.

"The two adults are expected to undergo surgery for non life-threatening injuries," he said.

Inspector McDonald said he could not confirm the cause of death of the children but did say that alcohol did not appear to be a factor.

He said the two children who died had been trapped in the car longer than the others and there had been some difficulty getting the doors open.

A police car rushing to the scene also rolled.

Inspector McDonald said the officer did not sustain serious injuries but it showed how easy it could be to roll a car, especially on unsealed roads.

Police are calling for anyone who was on Beaudesert Boonah Road yesterday and may have dashcam footage of the crash that killed the two children to come forward.

A report will be prepared for the coroner. 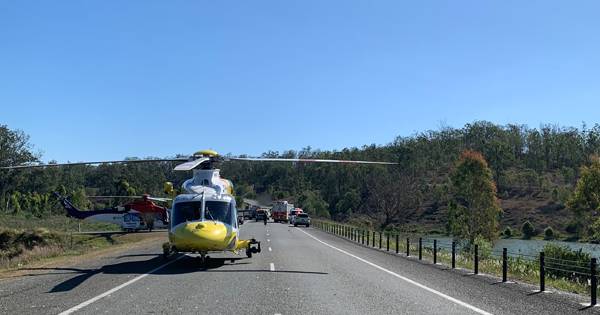 ONSITE: One of the two choppers at the scene of the crash this afternoon.

TWO children have died in an accident when a car went off the Beaudesert-Boonah Road at Wyaralong in a heart breaking weekend on south-east Queensland roads.

A police spokesperson said the vehicle rolled into Wyaralong Dam about 3pm.

They said preliminary information suggested a car with six people on board was travelling westbound along Beaudesert-Boonah Road when it lost control and crashed.

"The car was submerged in the water for a period of time before the six occupants, two adults and four children, were recovered by emergency services and witnesses.

"Two children were pronounced deceased at the scene.

"Another child was airlifted to hospital in a critical condition while the fourth child was treated on scene.

"A man and woman were also transported to hospital for further assessment."

Police divers and the Forensic Crash Unit are investigating.

Police closed Beaudesert-Boonah Road in both directions and appealed for people to avoid the area as helicopters were scrambled and emergency services raced to the scene.

An RACQ spokesperson said the Toowoomba-based chopper was backed up by a Brisbane-based aircraft.

The Brisbane-based helicopter lifted a woman in her 30s in a stable condition, to the Princess Alexandra Hospital.

It follows a grim weekend on the roads, with a motorcyclist dying at Advancetown on the Gold Coast hinterland after a collision with a utility. Paramedics declared the 26-year-old rider from Tallai deceased at the site.

A spokesperson said preliminary investigations showed that at 9.50am, a motorbike travelling south on Nerang-Murwillumbah Road and a small truck collided head-on.

After the crash near Hinze Dam, police directed motorists heading towards Brisbane from the nearby border crossing to avoid the area by going through Mudgeeraba.

A motorcyclist also died at Norwell.

Police said a motorcycle was travelling along Pimpama-Jacobs Well Road when it collided head-on with a four-wheel-drive at 4.45pm.

Both vehicles ignited as a result of the crash, sparking a grass fire.

The motorbike rider, a 54 year-old man from Pimpama was pronounced deceased at the scene. 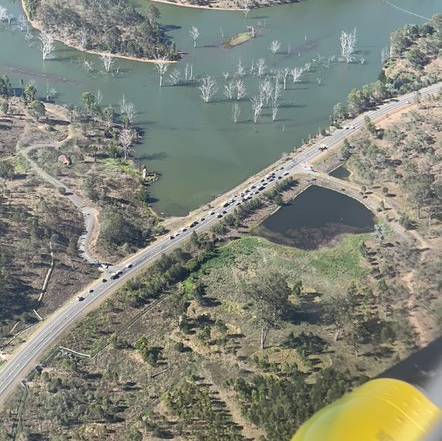 CHOPPER: A still from the Toowoomba helicopter as it approaches the crash scene at Wyaralong.

A second older motorcyclist also crashed on the Numinbah Road in the hinterland. His condition is not known.

The area is heavily used by motorcyclists looking for an exciting ride on twisting and mountainous roads and was exceptionally busy with riders on the weekend.

At Redlands a motorcyclist crashed on Mount Cotton West Road. His condition is not known.

On Saturday a car rolled at Cusack Lane and Henderson Road, Jimboomba. It followed a crash at nearby Marsden on Macarthy Road.

At 2.30pm police also attended a single vehicle roll over on Brosnan Road and Condamine River Road at Killarney. The condition of occupants is not known.

To the north, a 45-year-old Noosa Heads man has been charged after investigations into a fatal traffic crash at Lake MacDonald.

The crash occurred when a Volkswagen SUV and a Toyota Prado collided head-on at Cooroy Noosa Road on October 4.

The 45-year-old man has been charged with dangerous operation of a vehicle causing death, driving under the influence of liquor and driving without a licence.

He is due to appear in Noosa Magistrates Court on December 15.