DOES a monster lurk beyond our shores?

Tony Healy, investigator of the unexplained, will be visiting the Hawkesbury River this week to find out.

Mr Healy, a Canberra local, has been roaming the world in search of semi-legendary creatures since the 1970s. 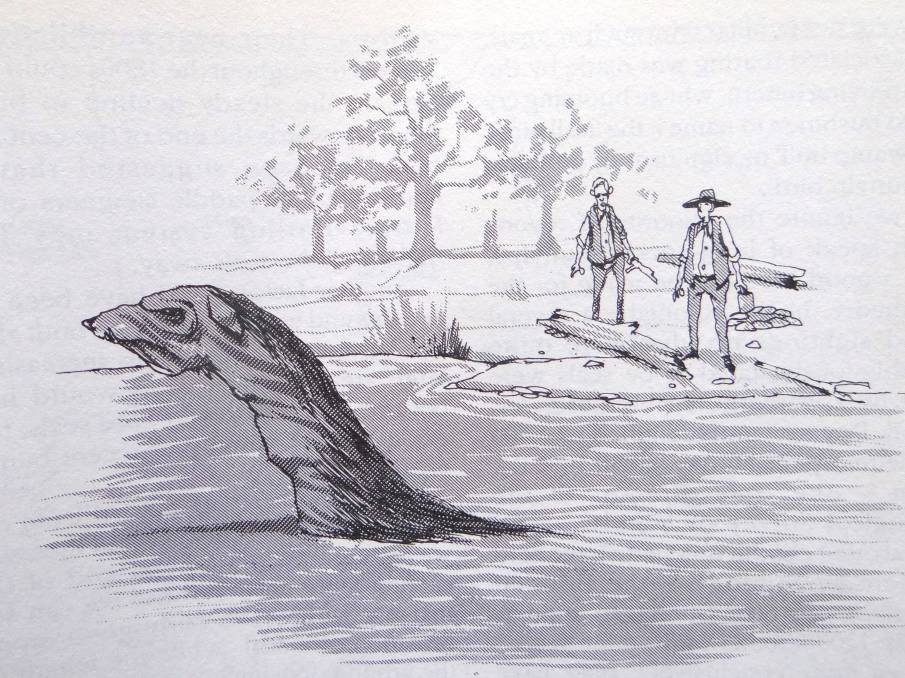 With his collaborator, Paul Cropper, he has written two books on Australian zoological mysteries: Out of the Shadows (Pan Macmillan, 1994) and The Yowie (Anomalist Books, 2006).

Having visited many other reputedly monster-haunted lakes and rivers, he is now focussing on the Hawkesbury.

While Mr Healy will be based at Brooklyn between March 8 and 14, he hopes to gather additional eye-witness testimony and to establish whether the mysterious creatures really do feature, as is sometimes suggested, in local Aboriginal lore.

If his search is fruitful, he will return to the Hawkesbury River, and base himself at Windsor for a closer look.

The Hawkesbury River has produced reports of large reptilian or eel-like animals since at least as far back as 1924.

Mr Healy has among his files a 1912 story from the Evening News, Sydney, called 'Was it the bunyip?'

"That concerns an alligator-like creature seen in South Creek, a tributary of the Hawkesbury River in Windsor," he said.

"[The creature] was seen by a boating party. A strange object swimming a short distance from them, about four-feet in length and resembled an alligator.

"There have been reports of them a hell of a lot bigger than that. I haven't been able to establish to my satisfaction that the reports of the bigger ones are genuine. But they may well be."

Another report that sparked his interest was one published in the Windsor and Richmond Gazette (the forebear of this newspaper) in 1924.

"People were talking about seeing a 'titanic seahorse', and there's a specific eyewitness report by a WJ Riley, who along with his brother, saw this thing while walking along The Terrace [Windsor] at midday. They saw something in the river beneath in a deep hole," Mr Healy said.

"He said, 'We saw a big ugly thing, 2 foot 6 inches to 3 foot in depth, with a length of about 5 to 6 feet, and of a yellowish or sandy colour. Whether its skin was scale-covered or not, we could not see. We watched for 15 minutes. It had a square-looking fish tail. It was not a pleasant looking animal. I should certainly not care to be in the water and have it after me.'

"Again, not a huge critter, but people were close enough, you would imagine, to see that it wasn't a seal or something like that."

Then there are the stories Mr Healy has heard from his friends.

"A friend of mine who lived down at Woy Woy told me that when he was a boy, there were lots of stories of some kind of monster in the Hawkesbury [River], so that would date from the 1950s or 60s. That also got me interested."

Mr Healy also cited the work of another investigator, Rex Gilroy, who has written about sightings of the monster from St Albans down to Windsor.

"It could be that this whole monster legend is just a series of misinterpretations of sightings of ordinary animals, or even just a tall story," Mr Healy said.

Back in 1965, Mr Healy was on a road trip in north Queensland, when he spotted what looked like "a sandy-coloured American mountain lion".

"That might have been the incident that kicked-off my interest," he said.

"We came around a bend and there was this creature right beside the road. It crouched, looked at the car, snarled, and we were past it.

"It took me quite some time to accept what I had seen. Shortly afterwards, I met a young lady at a party in Caanberra who was telling everyone how her father had just come back from north Queensland and he had seen a cougar or a mountain lion. So I thought, there might be something to this. I started to really focus on strange stories after that."

Mr Healy's first trip to Loch Ness was in 1973, and he has visited the area four times over the years, searching for their monster.

In 1969/70, when he was working in British Columbia in Canada, he searched for their sasquatch.

"I heard many stories of the sasquatch. I was working in a logging camp there, and I used to go off wandering in the bush with a camera, half believing it could have been real," he said.

Then there are the stories and legends of Aboriginal lore about similar creatures in Australia, as well as the black panther tales. He has looked into both of these.

But is Mr Healy a believer? Has he ever found enough evidence to conclude that any of these semi-legendary creatures are real?

"I've been all over the world for many years, visiting scores of supposedly monster haunted lakes and rivers," he said.

"It's interesting to see the similarities in what people say about these encounters around the world.

"There is any number of possible explanations: psychological phenomenon; some kind of mass hallucination; some sort of fear of dragons that's deep in the collective conscience of the human race, I don't know!

"But certainly, particularly when you investigate cases when there are multiple witnesses to the same event in broad daylight, you think there does seem to be something."

He saw something himself at Loch Morar, Scotland.

"It wasn't the world's greatest sighting, it only half surfaced, if that. But I saw what looked for all the world like a prop wash of a motorboat but with no motorboat in front of it. There was an American in front of me who had clearly seen a large aquatic animal in virtually the same spot the year before. We got a few photos but they don't reveal much," he said.

Mr Healy will begin his Brooklyn search with a trip on The Riverboat Postman. He will also hire his own boat.

"It could be that the pilot of the Postman's boat might know something. I imagine if I have a few beers in the Angler's Rest there, somebody would have an opinion at least," he said.

"Most importantly, I want to establish whether there is really Aboriginal lore about these things."

He will include the results of this and any subsequent treks in his memoir.

"It's one of my next projects to finish before I drop off the twig. I'll be 75 in April, so I might as well wrap that up. But I'll write something about this, whatever happens. If I conclude that it's just a tall story, well I'll write that as well," he said.

The working title for the book is Monster Safari.

Discuss "'Investigator of the unexplained': On the trail of the Hawkesbury River Monster"

Discuss "'Investigator of the unexplained': On the trail of the Hawkesbury River Monster"