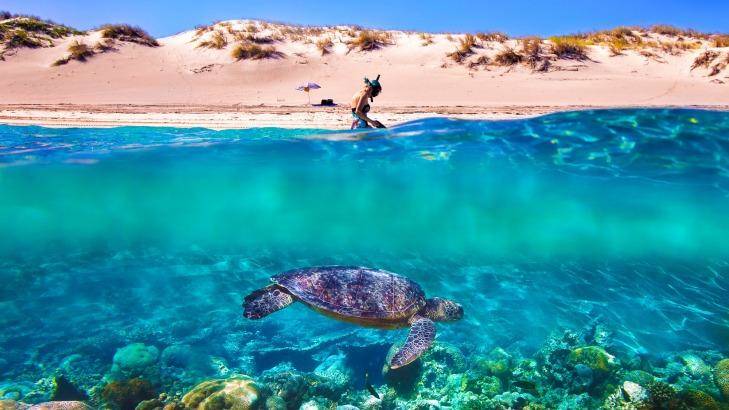 Australia killed its last whale in 1978 – it was animal #764, a female sperm whale taken by the Cheynes Beach Whaling Station in Albany. After 150 years of harvesting blubber, only a few hundred whales were left to ply their lonely migration up the west coast, past Ningaloo Reef to their breeding grounds in the Exmouth Gulf.

It's strange, then, to find that there are simply too many whales off Ningaloo.

"Nahh," says Matt Oakley, skipper of the Windcheater, "it's another mother and calf…"

On any other day, in any other part of the world, the prospect of seeing a humpback whale with her calf would be met with unbridled celebration. But the Humpback Highway is so busy with whales that in a single day of sailing I see a dozen pairs. And shocking as it may sound, we don't actually want mothers and calves.

In 2016, the West Australian government issued its first licences for Swimming with Humpback Whales and they came with stringent guidelines. One of these was "no swimming with calves" – decreed to reduce any stress on the mothers plus avoid any dangers posed by aggressive male escorts.

There were other rules. Only five guest swimmers to be in the water at any one time. And whales performing tail slaps, pec slaps and breaches were declared off-limits. When a 40-tonne humpback launches itself out of the water – so close to the boat that we can feel the shockwave as it crashes down – we perfectly understand how a breaching whale can spoil your holiday.

So no-one is complaining about the guidelines, certainly not the 11 boat operators who have been granted licences. These are the same operators who ply Exmouth's waters so guests can swim with whale sharks, and they're delighted how sweetly the two migrations dovetail to extend their season: after the whale sharks have visited from March to August, some 30,000 humpbacks pass through from June to November.

The two "swim-with" operations are practically the same, using comfortable vessels with rear marlin boards from which snorkellers can easily enter the water, as well as spotter planes to help direct the boats to suitable animals.

My day-long whale trip begins in the colourful shallow waters of Ningaloo Reef, where crews ensure everyone is comfortable with their snorkelling gear. It also gives us the chance to enjoy small clouds of fish and a three-metre bull ray flying over brain coral.

After this we're out into the deeper waters to find our perfect humpback. Which is where things get rather different.

"Swimming with whale sharks is easy because they're so passive," says dive instructor Tom Hiney on Windcheater. "But humpbacks are a different matter altogether. When you get in the water there's definitely a bit of adrenalin."

As the big catamaran plies the waters, some guests let the hours pass in an easy torpor, sunning themselves on deck and watching the red flanks of the Cape Range contrasting with the stripe of turquoise reef.

Others, however, are in a feverish state of vigilance, assisting the skipper in looking for telltale blows on the horizon. And when it seems the right animal has been spotted, the energy is explosive. Again and again we're mobilised for action – "Wetsuits on! Flippers on!" – but again and again a calf somehow emerges into view.

By 3pm it's time to head for home. And while there's a sense of disappointment, we're hardly going home empty handed. During the day, we swim with a manta ray, we see hammerhead sharks off the bow and when a calf and mother venture up to the hull of Windcheater, we go eyeball-to-eyeball with both.

Just as we're on the home stretch, Tom sends up a shout: "Eleven o'clock! Big pod coming towards us!"

The skipper radios the pilot, whose response crackles back: "Looks like they're all adults. Five of them."

The boat is maneuvered upstream of the approaching pod. In the distance they look like black upturned hulls, a constant loop of broad backs and tiny dorsal fins.

Tom gives them one last look, then with all the urgency of a whaling captain, bellows: "GROUP 1, GET READY!"

I'd envisaged swimming with a whale to be a moment of gentleness, a miracle possibly accompanied by a little panpipe music. But it's nothing like this. When, I slide quietly off the marlin deck into the water, my heart is hammering, and though the water is warm, I can barely get my breath.

Tom is in the water, calmly and firmly instructing us to make a single line – "Stay in the line, stay in the line". But I'm fixed on only one thing. And that's five adult humpback whales ploughing through the water directly towards me. Bobbing in their path, my perspective is suddenly very different, for they appear not as a miracle of nature, but as a black steam train or a Dreadnought, puffing and chugging inexorably onwards …

I quickly press my face in the water and see two humpback whales gliding through the pale protein-rich waters of Ningaloo.

In truth, they're far, far beneath my flippers, apparent as huge dark shapes with some clear mottling, and as whale encounters go, this one is not exactly intimate.

But does it matter? Absolutely not. Getting into the water with the "whale train" steaming towards me is an extraordinary experience. Moreover, considering it's not even 40 years since the carcass of Whale #764 was winched out of the water, and considering we've been thwarted by dozens of freshly born calves, it's a sighting that's as wondrous as you could wish for.

Fly Qantas (qantas.com.au) from Melbourne and Sydney to Perth; connect to Learmonth Airport south of Exmouth.

The 2016 season was a trial, but it's expected to continue next year with whale-swim season operating from August 1 to October 31. Ningaloo Discovery (ningaloodiscovery.com.au) operates Windcheater, a 55-foot catamaran capable of taking 23. It costs from $129 plus $90 if you get into the water with a whale or a humpback. For smaller charters, Live Ningaloo (liveningaloo.com.au) operates a fine 40-foot motor launch called Waverider that can accommodate 10 people. Whale swim adventures from $550pp. All food and equipment included.

Max Anderson was a guest of Tourism Western Australia

This story Swim with whales off Ningaloo Reef: The Humpback highway first appeared on The Sydney Morning Herald.