Queens of the Outback took 12 months for Simon Vowles to write – even longer if you count the time it took to get it to the point where he could sit down to work on the script. Finally, it's currently touring clubs across Australia, milking the outrageous juxtaposition of fishnets, heels, wigs and shoulder-pads with the trappings of suburbia – just as Stephan Elliott's famous film did in 1994.

I spoke to Simon by phone not long after opening night in Melbourne.

So tell us about the show.

It's loosely based on Priscilla, Queen of the Desert. Three drag queens get offered a job out in regional Australia and decide to take it and get into a hell of a lot of mischief on the way. I've turned it into a musical as well. and the avenue I've taken with all the music I've turned it into a musical mash-up. A lot of songs from Glee, Pitch Perfect, songs from all over the radio where people are playing lots of mashups and mix-ups and layering music over music . . . Everything from Lady Gaga to Dolly Parton to Cold Chisel to Bruno Mars, I've pretty much covered all bases.

How many songs, or bits of songs, have you used?

50 or 60, easy. We had our opening night last Saturday night. It was amazing. Everyone had such a great time. Most people in that audience ranged from about 50 to 70 and they absolutely had the time of their lives! They didn’t know the Lady Gaga songs but they knew the tracks by Dolly Parton, and the Jimmy Barnes songs they loved.

Will it appeal specifically to gay audiences?

No, not at all. I’ve pretty much hit every genre out there. Something for everyone. Young kids, er, well, hmm, I've rated it 15+. The kids could come and watch the show and have fun with all the music and all the pretty costumes and all the adult jokes would probably go straight over their heads, a bit like The Simpsons. It's not a rude show. It's a whole lot of fun.

How do you manage the mechanics of getting out of frocks and wigs and heels between numbers?

We have a dresser backstage and also a video guy and our makeup artist help us to change. it's quite involved. And of course we've had wardrobe malfunctions! Zips have broken, pants have split up the bum!

You have a background in drag?

Not as a drag but definitely in choreography and dancing. I danced in Les Girls for a couple of years. As boy, not a girl. I was about 30. It was the Melbourne cast. They teach you a lot about makeup. After Les Girls I actually got a job as a makeup artist and I did that for a few years so I'm no stranger to getting dolled up. It's a lot easier putting makeup on someone else than on yourself, I can tell you. It takes us about two and a half hours to get ready for the show. There's quite a bit of work involved. Especially in this heat.

How many layers do you wear?

As few as possible! You've got your big sequinned gowns, your big fur jackets, shoulder-pads.

It's a lot of weight to carry around. Is it hard to move?

Depends on what you're wearing. My finale costume is the heaviest because of all the head-dresses and all the sequins, they just weigh a ton.

How do you keep wigs on?

That all depends on what kind of wig you wear. I wear a wig that has netting on the front which you kind of glue down and looks natural, like your real hair. But the other two guys two don’t have that. They just whack a few pins in and off they go and hope for the best.

Get lots of hecklers?

We love hecklers. We love hecklers! Look, we've got a cast full of seven divas! They'll attack any heckler! I love hecklers, to be honest. They make the show a bit more fun. Not the horrible hecklers, but you very rarely get that. Seriously, in my whole life I've probably only ever experienced a couple of them. At most. I had a streaker one time on stage. That was funny. I was doing Grease: The Arena Spectacular. I was one of the dancers and I remember doing a finale and Craig McLachlan was up singing his little finale song and this guy just jumped up from the audience completely naked and did three laps around the Greased Lightning car . . . !

He just kept going! We were in hysterics. The guy did three laps before security got him. Craig loves that sort of thing anyway. it makes the night! Brought the house down.

How long does the show run?

The first half goes for about 50 minutes and we have an interval and the second half goes for half an hour. Not too long, not too short. There are seven in the cast. Two normal boys – Pete, our Michael Jackson impersonator, he also plays Black Butt the Aboriginal, and Craig, our little actor-dancer. We've got two real girls – Anna, who's our standup comedian and the biggest diva of the lot, and Lili, she's our Eighties diva, our amazing lead singer. Then us three drag queens. Of course, I play the bitter old bitch.

Have the real girls, to use your phrase, ever been mistaken for drag?

No, they're too hot for that.

So you're saying the drag guys are not hot?

They didn't want us drag guys to look like pretty girls, they want us to look like drag queens 'cos it's more fun. The girls are so stunning in the show. They're beautiful Nearly six foot tall. They look like supermodels, they're gorgeous. There is a strip scene. Lili does a striptease, one of my favourite numbers, actually.

Will straight husbands in the audience feel uncomfortable?

They'll love it. I didn’t write it for the gay scene. I actually wrote the show strictly for regional Australia and I've done this sort of tour before with another show, Time Warp.

Not much, but I guess It changes the way your write . . . I guess, it’s more the music. For a strict gay scene I’d have used a lot more Donna Summer and Diana Ross and Les Girls-type music but I didn’t do that here. Our opening track of Act Two is Khe San by Jimmy Barnes and Cold Chisel. It's us three drag queens in these amazing outfits singing Jimmy Barnes! It's great and the audience love it but I wouldn’t do that to a gay audience.

And what would Barnesey say?

He'd love it! Of course he would. I mashed that song up with the old John Denver track Leavin' on a Jet Plane and the Beatles' Ticket to Ride. We open the show with a little Gaga medley, beautiful duet ballads of Poker Face, Telephone and Bad Romance. With a few others mixed in, too. No Born this Way I'm afraid. I couldn't find a way to make it fit. I know it's the big gay anthem. But I put it into the pre-show music as people are walking into the theatre.

What's the moment you most look forward to?

Actually the opening of Act Two, Khe San. It's such an amazing song to sing! Also I love watching Lili striptease. And I love watching Anna Burgess play Shazza, the bush queen who owns the pub. She's got this mullet and massive boobs and wears this flanny and leopard-print tights. It's totally hysterical.  ❏

Nick Atkins for A Boy & A Bean – Jack, the giant killer

Debbie Reynolds for Behind the Candelabra – What a glorious feelin’, I’m workin’ again

Matthew Rhys for The Scapegoat – Seeing double – and the Walkers' wine was real!

Simon Vowles, plus plumage, is touring Queens of the Outback around the country. 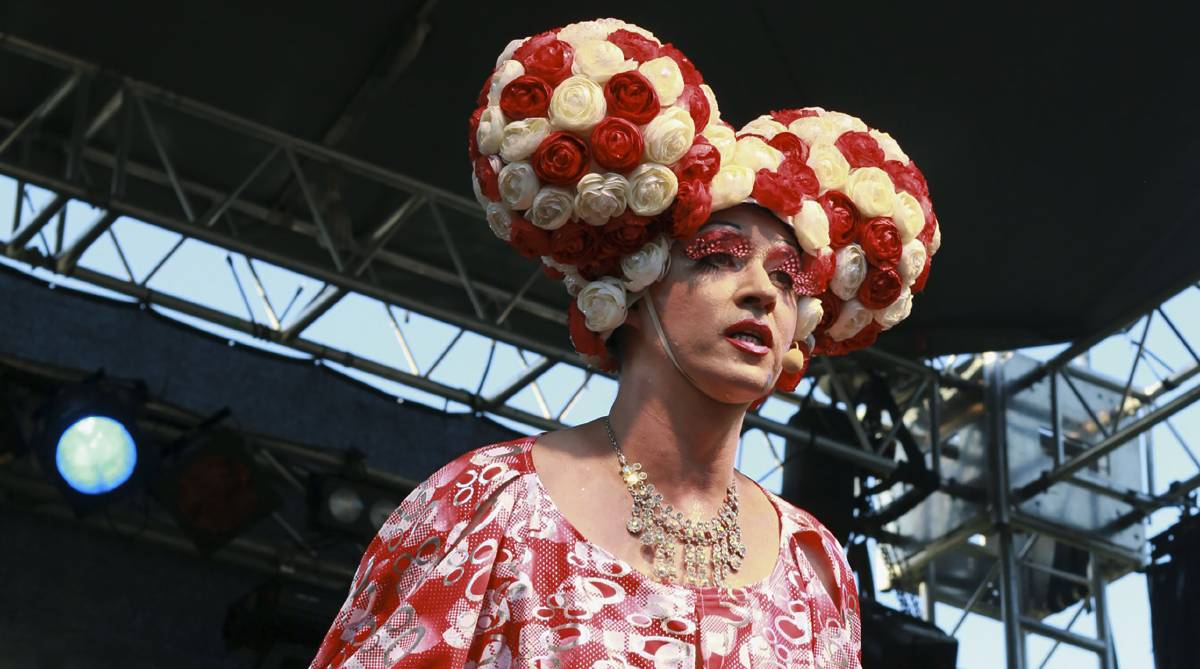 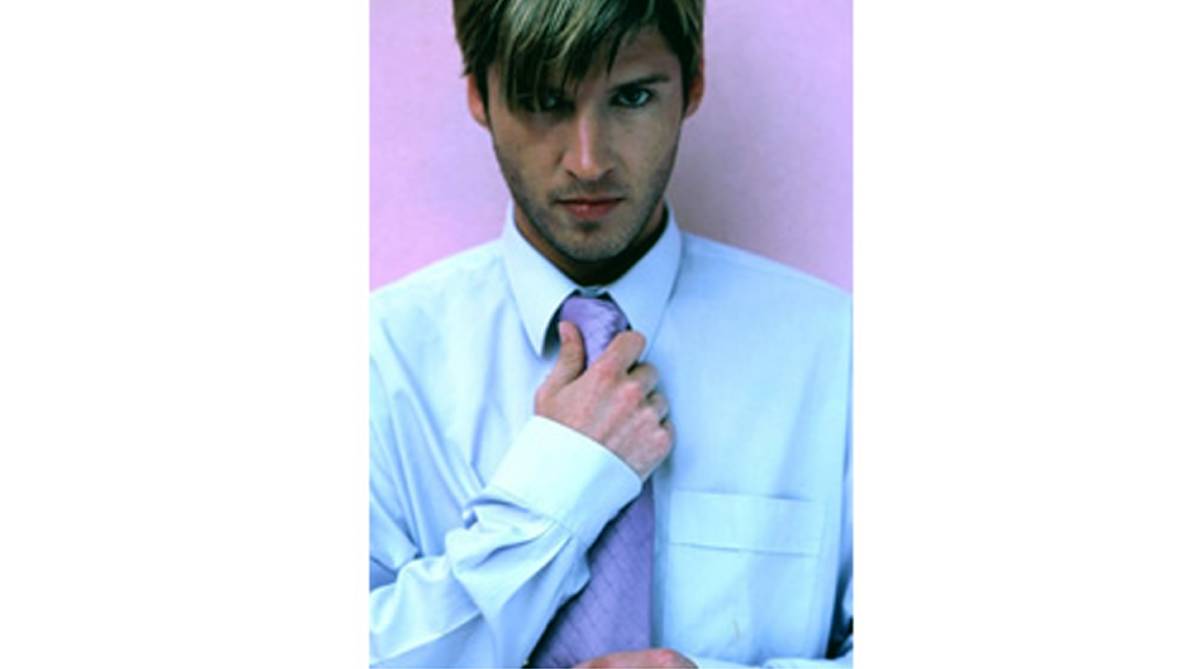 Simon, looking less royal out of the queen's frock.

Discuss "VIDEO: A frock and a rock hit town!"

Discuss "VIDEO: A frock and a rock hit town!"