A Boy & A Bean is a play about marriage equality, or the lack of it, and why these issues really matter. It was written by Nick Atkins, who lived most of his life at Emu Plains, and now, at 25, has already studied drama in France and Germany, won a Cate Blanchett acting award and has just learned A Boy & A Bean has been invited into the upcoming Dublin Theatre Festival so he's heading to Ireland in May to perform the one-man play. First off, it's playing at Erskineville and Penrith. I spoke to him during rehearsals at the Joan at Penrith.

Would you like to be able to marry a bloke?

I'd like to be allowed to marry a bloke. Whether I'd like to is a different story. [laughs]. I haven’t met anyone I want to marry yet so that’s probably the first hurdle, eh? Marriage equality is quite a simple issue – all couples across this country should have equal access to it and the rights that come with it.

Most people believe that, so why don’t we have it?

We’re at the tail end of a very long meteorite that’s trailed across our country. We're a country of conservatives, to an extent. It’s a matter of time. It’s sad it’s taken so long. This year Dublin is having a referendum on it and they’re confident it will succeed.

It’s happening round the world. And there's a groundswell of support right across Australia so where's the hold-up?

Two things. First we need the government to allow a conscience vote on it. The second step would be for the Labor party to have a binding vote on it.

If we're a democracy and most people are happy to have same-sex marriage what right does the prime minister have to not represent the will of the majority?

That's a very good question. But the prime minister is not claiming to represent the majority. He’s quite explicit about acknowledging that this is his personal view and that marriage equality is what he calls a difficult or fashionable issue. Which is, of course, a patronising description of an important issue for any community. So what right does the prime minister have? None, to an extent. He has every right to his own opinion and I appreciate that. A Boy & A Bean looks at what I call the giants, the bigwigs, the power-brokers who sit quietly behind politicians and maybe influence things that are said, despite the community's overall support for this issue.

Marriage equality produces a range of responses in people. Many say "Look, let it happen" and others are more passionate and say "Let's make it happen" – to the point where there is anger among those who say they feel fed up with being marginalised, patronised, ignored and disenfranchised. Where do you stand on this spectrum?

Actually, there are more pressing issues than marriage equality. We've got greater fights to fight. Look at current exemptions in the anti-discrimination act, the treatment of gay asylum-seekers. Marriage equality is a more attractive campaign, it's more exciting, it’s sexier, it's accessible . . .

But you chose this. Why?

It's a meditation on marriage equality, not a campaign for or against it. I want to support my community – queer, lesbian, gay, bisexual, trans – I want to help these people open a conversation about what marriage might mean for them and their lives. Marriage is a very traditional old-school concept and we as a community are currently integrating all the baggage that comes with that into our relationships and it's actually breeding a new conservatism which I find really sad. A bit of vibrancy is being squashed out in this campaign to be accepted in a more traditional way.

Marriage is on the decline here and worldwide yet the gay community is pushing for it, ironically wanting to move backwards into a very conservative way of hitching up. Maybe there's something a bit deeper here – that it's not so much that gays want conservative marriage as that they don't want to be told they can't join that club. Discrimination, pure and simple.

That's a really good point. That's what I meant when I said I should have the right to marry just like my sisters. Whether or not I personally want to marry is another hurdle for me. And that's what this show’s about. Let's get over the first hurdle and then work out where we go from there.

What have coffee beans got to do with marriage?

Coffee beans grew out of research I did into a certain coffee-house franchise which gave $30,000 to the Australian Christian Lobby which has led the charge in lobbying the government against this legislation. But I also looked at Jack and the Beanstalk and considered how it could be a nice allegory. We're Jack, a mere mortal, trying to climb a magic beanstalk to a treasure hidden in the clouds and protected by a giant.

What was it like growing up gay in Emu Plains?

Very strange challenges, very quiet subtle pressures, a common experience for the area. When you don’t have a visible community you resonate with there can be a quiet suffering, I was very lucky I never experienced direct homophobia or any kind of direct or verbal assault but there was this lack of visibility and lack of anyone to talk to that was a huge challenge. Emu Plains is just an hour and 10 mins from the centre of Sydney and yet when you’re under 18 that can be a country away.

At what age did you identify as gay?

Well, you did – you told yourself. What type of language did you use? How did you have that conversation with yourself?

What I felt was what I've come to call toxic shame. This is a quiet thing that sits in you and tells you that a relationship with someone of the same sex is completely forbidden. So in primary school I'd already come up with strategies to navigate a heterosexual relationship. I'd say to myself I know I’m not into this but these are ways I could make it work with women. Isn’t that bizarre?!! For someone in year 5 or year 6!! I've always been conniving and mischievous!

It's a matter of survival.

Tell us more about that place up in the clouds in Jack and the Beanstalk?

It's what we're all striving for. I used to be very attached to the idea of marriage and thought I needed it to make me whole. The protagonist in my play is a thinly veiled version of me and the first part describes marriage as the goose that laid the golden egg and the government or the Australian Christian Lobby is the big bad giant. The moral of the story is the idea that maybe marriage is the goose that laid the golden [but flawed] egg and maybe self-acceptance and internal validation are the real treasures and the only giant who stops us getting that is ourselves. Internalised phobia is one of the biggest battles gay people face. That's the real giant in this story. ❏

■ Nick Atkins' A Boy & A Bean plays at PACT, Erskineville (February 11 to 15), Joan Sutherland Performing Arts Centre, Penrith (February 19 to 22) and the International Dublin Theatre Festival (May 5 to 18).

Debbie Reynolds for Behind the Candelabra – What a glorious feelin’, I’m workin’ again

Matthew Rhys for The Scapegoat – Seeing double – and the Walkers' wine was real! Nick Atkins, writer and star of A Boy & A Bean. Picture: Ian Horner 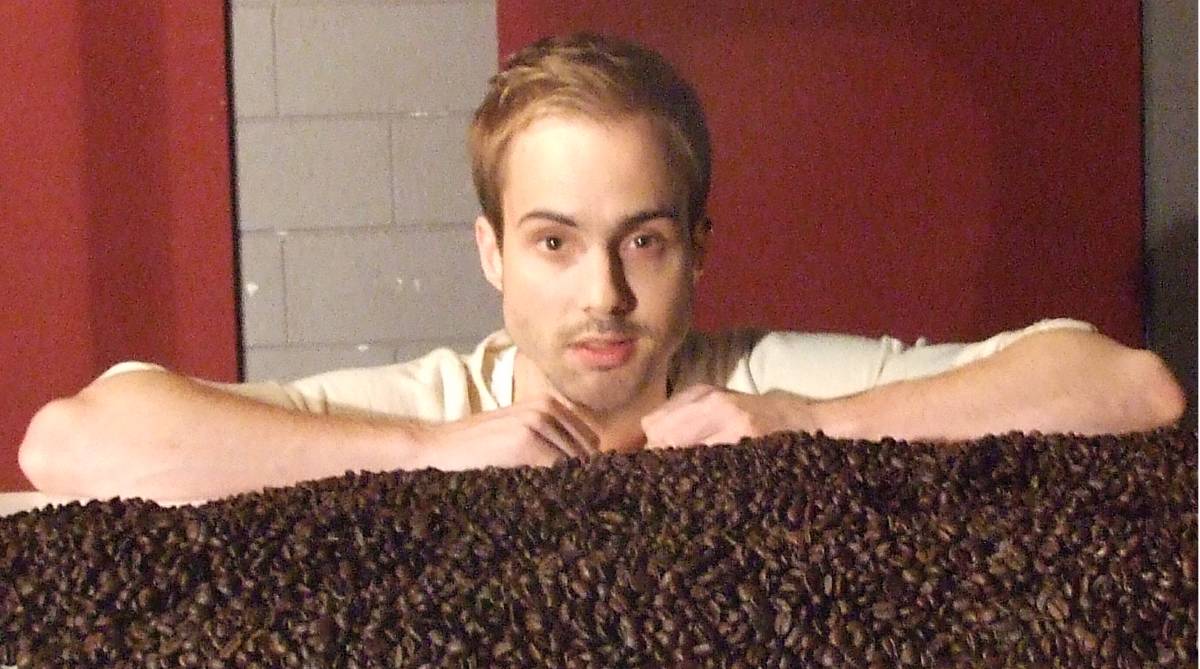 Nick Atkins, writer and star of A Boy & A Bean. Picture: Ian Horner

Discuss "VIDEO: A Boy & A Bean or Jack, the giant killer"

Discuss "VIDEO: A Boy & A Bean or Jack, the giant killer"