She murdered the boss in 9 to 5, she organised the President on The West Wing and she was one of the desperate Desperate Housewives. She was on Will & Grace, Murphy Brown, Damages, The X Files and even The Simpsons. On film she's worked with the biggest and the best – the late Robert Altman (several times), Franco Zeffirelli, Woody Allen, Paul Schrader – and has a range that spans heavy drama and the lightest comedy.

Lily Tomlin got her break on Laugh-In, the groundbreaking departure in format for TV comedy in the Seventies which introduced her stable of unforgettable characters. And she's doing it again. Breaking ground in screen comedy, this time on the web-based series Web Therapy which has been such a huge hit the Showtime network picked it up and repackaged it for broadcast and now it's on DVD.

The whole show is done on Skype, with a therapist dispensing her wisdom in three-minute in-depth mini-sessions with her clients over the internet. But for maxi-fee, of course.

The mastermind behind it is TV's Phoebe Buffay, Lisa Kudrow, who wanted something fresh and original into which to sink her teeth and her time post-Friends. She's the shrink.

Tomlin says it makes no difference whether an actor is working in drama or comedy, though being a comedian can make the transition easier. Everything's in the timing. And a comedian really has a finely-tuned sense of what makes a character tick.

It seems the self-obsessed Fiona Wallace, Kudrow's character, has inherited much from her mum – that's clear from the moment we meet Putsey, played by irrepressible Tomlin.

Tomlin was on the line from her home in Los Angeles.

Putsey and Fiona are not so much passive-aggressive, they’re just plain aggressive . . .

"Oh, gosh. Putsey is a kind of well-off Bostonian. She’s very competitive with her daughter, very squelching. And the daughter, Fiona, is neurotic and narcissistic. She does these three-minute therapy sessions on the internet. On the DVD box they call her a therapist who has no patience. She has absolutely no regard and no real time for her clients – she’s too interested in herself. And Putsey is a step worse than that. As bad as Fiona is, Putsey’s a bit more mad, and self-centred, and vindictive, and just unaware of anyone else."

Did you worry about the limitations of the tiny performance space, you know, just a Skype screen?

"I really don’t think so. Maybe the monitors have some limitation, the characters have none. The possibilities were so off the wall I don’t think I thought beyond that. I was thinking just like Putsey – just of myself and having fun [laughs]. And it really has been fun. Wait till you see the next seasons – it gets even better."

Comic performers can be marvellous with other people’s lines but struggle to come up with their own. You're obviously in your element. Ever worry about ad-libbing?

"Well, sure, you never know what’s going to happen. But there's lots to develop here. Putsey has a rich persona, there's her conflict with Fiona – who wants money from her. She says everything that comes into her head. She’s just the mother from hell. Fiona doesn’t want to have anything to do with her and Putsey doesn’t want anything to do with her children –Fiona, played by Lisa Kudrow, and Shevaun, played by Julia Louis-Dreyfus [Seinfeld]. In the first season she also thinks she has a Vietnamese son that she gave away back when she wasn't married and going to peace protests and things like that . . ."

Which brings up one of the many beautiful throw-away lines, and there are many. You say, under your breath: "You know how I love things Oriental."

"Yes! [laughs] There's all the play on that and looking deep into his eyes and having to hold him down [laughs]. It just cracked me up!"

You had set plot points and a back story but if you suddenly had a great idea did you have the freedom to go with it?

"Yes. I mean, after the taping you might say 'Is that gonna fit into the storyline?' Or ah 'Just how smoothly did we do that?' And we might have to pick up something to massage it. Or it just might never see the light of day again. I mean, they go and edit, too. You don’t really know quite what’s gonna come out. I lobby, of course! I always lobby."

Were you in different rooms during recording or were you actually next to each other?

"We were on the same soundstage but we were several hundred feet away. She's on one side of the soundstage and I'm on the other. I see her in the monitor. It's just as if I were looking at her in a computer screen and I guess she sees me. And that's how it played. We have an earpiece. If we forget something or some plot point the producers are in our ears telling us, ah, 'Don't forget you've gotta go to India!' [laughs] or something like that."

Lisa Kudrow had gone from famously getting a million dollars an episode on Friends to doing this as a low-budget webisode originally on a site sponsored by a car company. What was she like to work with?

"She's darling. Just like Phoebe in many ways. I mean, not in her psychological personality but in her physical manner. She's very genuine and she's very smart, so she's quick and she's fun and, you know, part of the fun of doing something like this is cracking each other up. And she's very giving, and responsive and, like most good actors, very generous. They're so involved in what they're doing, they want it to be so good and in the moment they're kind of living it, as much as they can. They want it to be real, and they want it to be successful. I've never met a good actor who was really competitive. You know, you need to make the scene work."

"You hear all these great stories of grand dames and king-pins in the theatre who are like 'Get rid of that chorusgirl – she's attracting too much attention' or having the director stage something so the ingenue is looking upstage at the lead, or they just replace people, you know [laughs]. I've heard stories like that. I've never, or at least I've never consciously, experienced it. Maybe they were doing it to me and I was too thick to see. But not Lisa."

So there were times you just broke up laughing out of character?

"Oh, yeah! Or an experience can just take over. They put some of it in at the end, like a blooper reel. We were tickled, you know. Even Meryl [Streep, who also co-stars] would crack up and stuff. I didn't have a scene with Meryl but I've seen footage where she would just, you know, give it up. And when I worked with her on Prairie Home Companion that was one of the most fun things to do, I'd always surprise Meryl 'cos she loves to improv and fool around and be surprised and – most actors do. It makes you alive in the moment. I love playing Putsey. Mothers are always good value. I even played my own mother in one of my specials. She'd come on and she'd wave to everybody and say thank you for coming to Lily's show and she'd turn to me and say 'Don't mention any body parts and don't use any of that vulgar language and you'll have an audience for the rest of your career!' [laughs]. And I'd say 'Of course not, momma' and then do exactly what she'd told me not to."

When are you bringing your show back to Sydney?

"Ah, I don't know. I had a great time when I was there last. I got to be in the Mardi Gras parade.That delighted me. Oh, Ian, the best thing were the drag queens moderating the parade. Really savage, really big guys, way over six feet. And I sat at the table with them during the Foxtel broadcast and I got a picture of it and I look like my child character Edith Ann sitting between two adult women! I barely came up to the tabletop!! It's such a great visual, I just thought it was great! ❏

■ 60-SECOND REVIEW: THE LAST THING I SAW by LILY TOMLIN

I saw Behind the Candelabra on television and I thought some of it was fun and interesting. I thought some of it was sleazy, too, in a way. I was disappointed to learn that Liberace was quite a callous, cruel guy. After he’d used his boyfriend he just threw him away. I thought some of those performances were pretty brave. Especially Michael Douglas. It just seemed so completely out of sync with his own self-image. I watched it and I enjoyed it but I don’t know that I’d go back and watch it again. It got 14 Emmy nominations! Some things are, you know, kind of guilty pleasures and you have fun watching them.

I had Liberace on one of my Vegas TV specials once, Lily Sold Out. The plot has Tommy Velour, one of my characters, on stage at Caesar's and while I'm trying to sneak away because he's so embarrassing he introduces me as 'that chick from Laugh-In', applause, and we cut to Ernestine, another of my characters, sitting with Liberace at a table and she says “Oh that just steams me” because she’s so mad at Lily anyway. She always thinks Lily has ridden on her coattails and her fame and she’s got nothing out of it. So that’s how we got Liberace on our special. He was very nice to do it. He came with a white ermine jacket on and there’s a candelabra on the table and Ernestine is just full of herself, looking around making sure everybody’s noticing. That’s the kind of stuff I like! ❏

Matthew Rhys for The Scapegoat – Seeing double -- and the Walkers' wine was real! 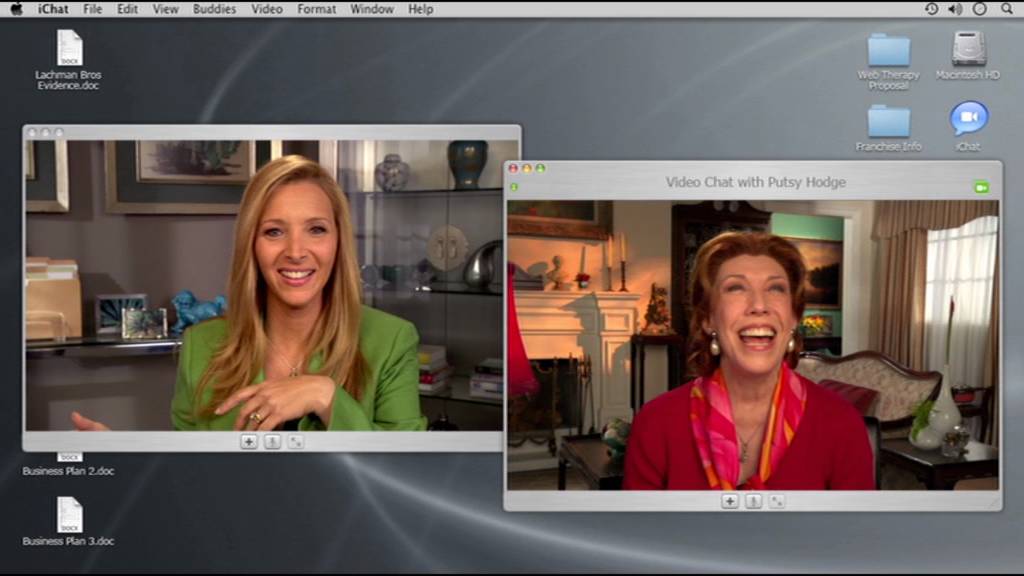 Lisa Kudrow, as the shrink Fiona, with Lily Tomlin as her meddling mum, Putsey, on Web Therapy 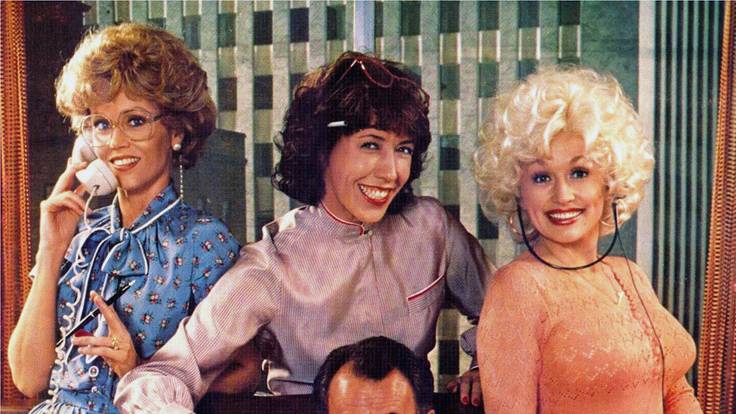 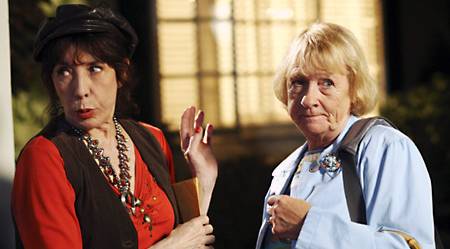 With the late Kathryn Joosten, a couple of Desperate Housewives. 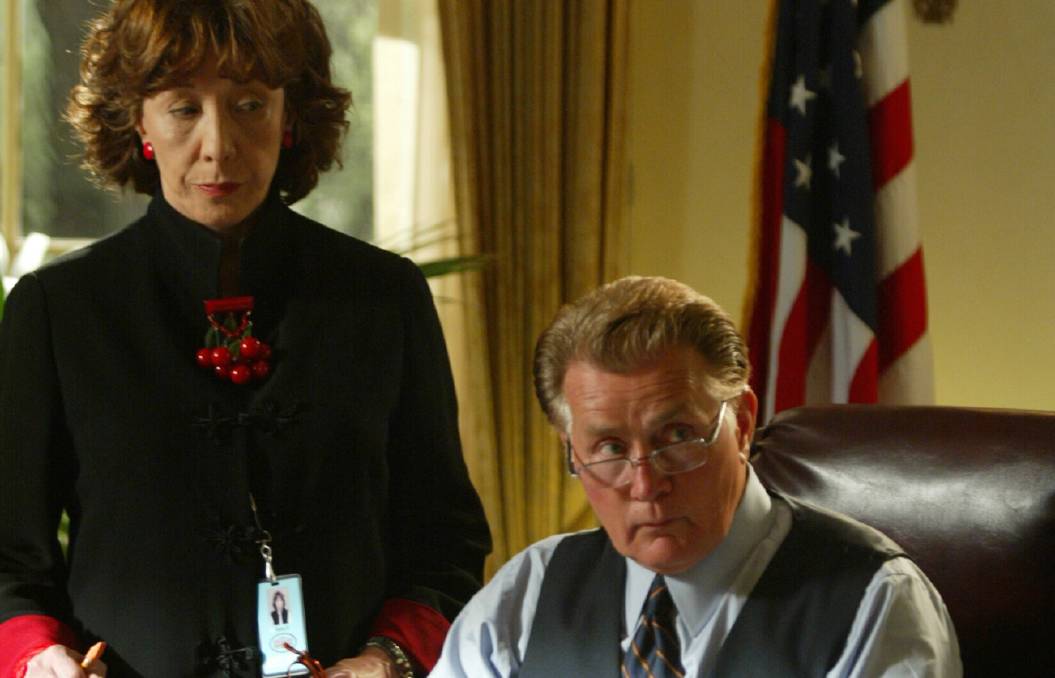 State of the Union: As the First Secretary, Debbie Fiderer, with President Martin Sheen on The West Wing. 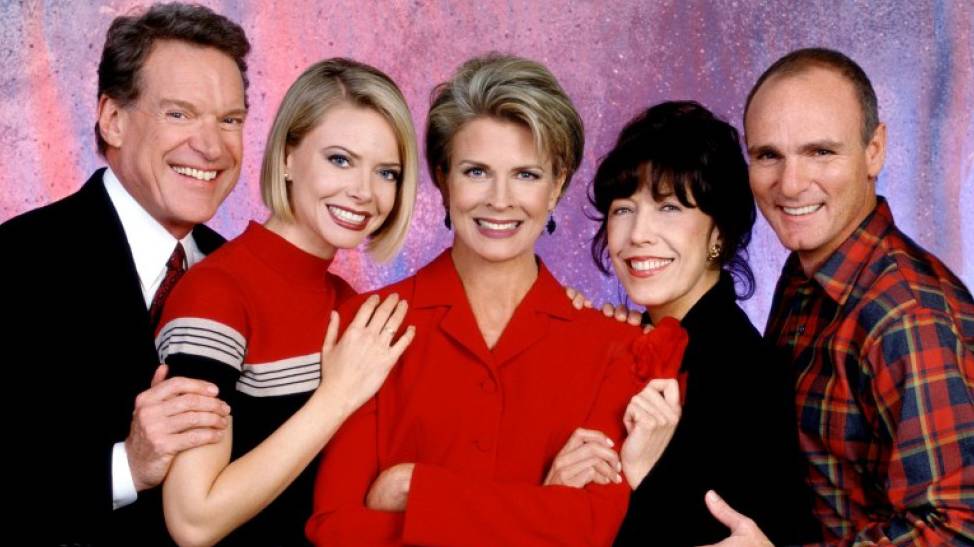 With Candice Bergin (centre) and the cast of Murphy Brown.

Lily has Tea with Mussolini and Cher. 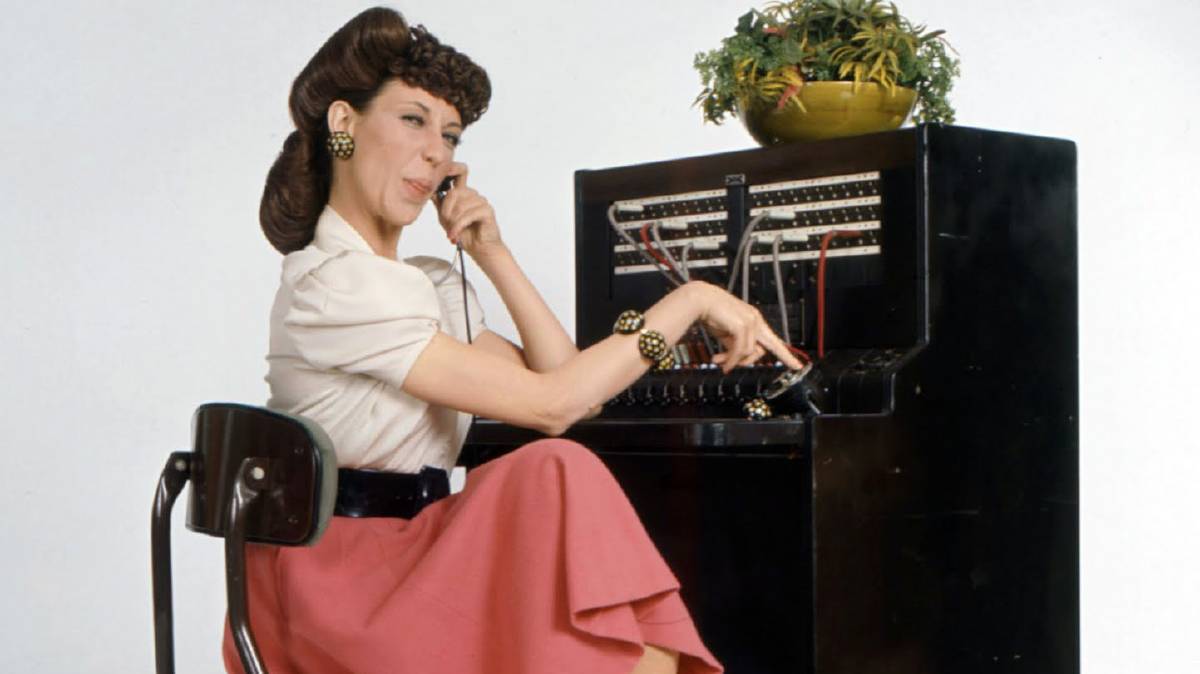 As Ernestine, the vicious switchboard operator, on Rowan & Martin's Laugh-In. 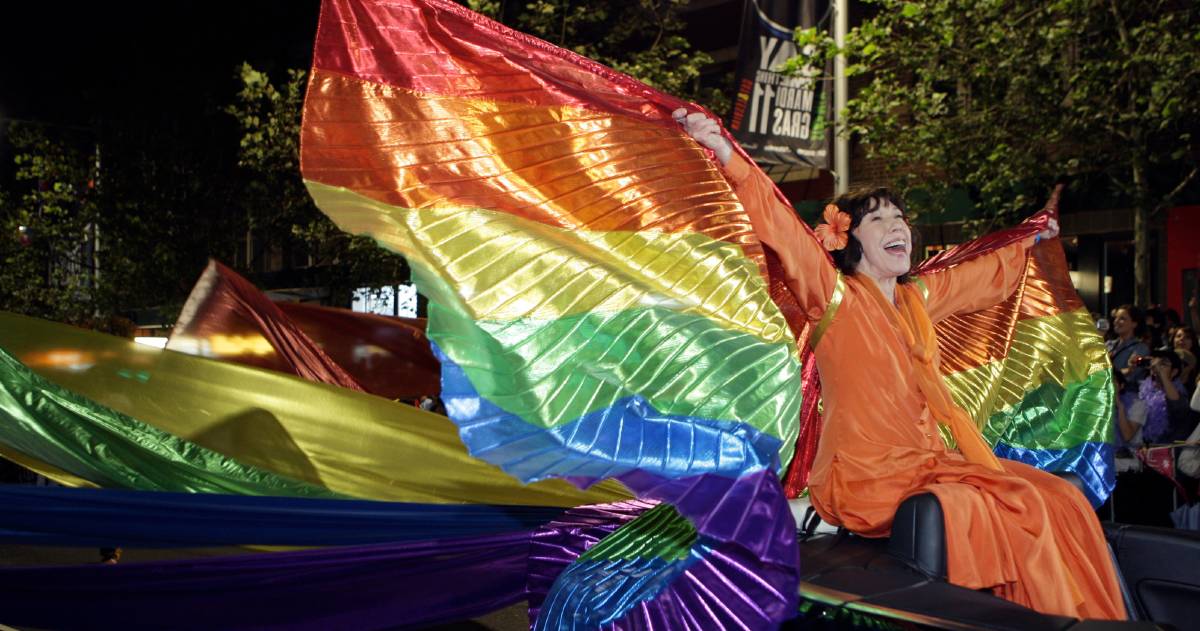