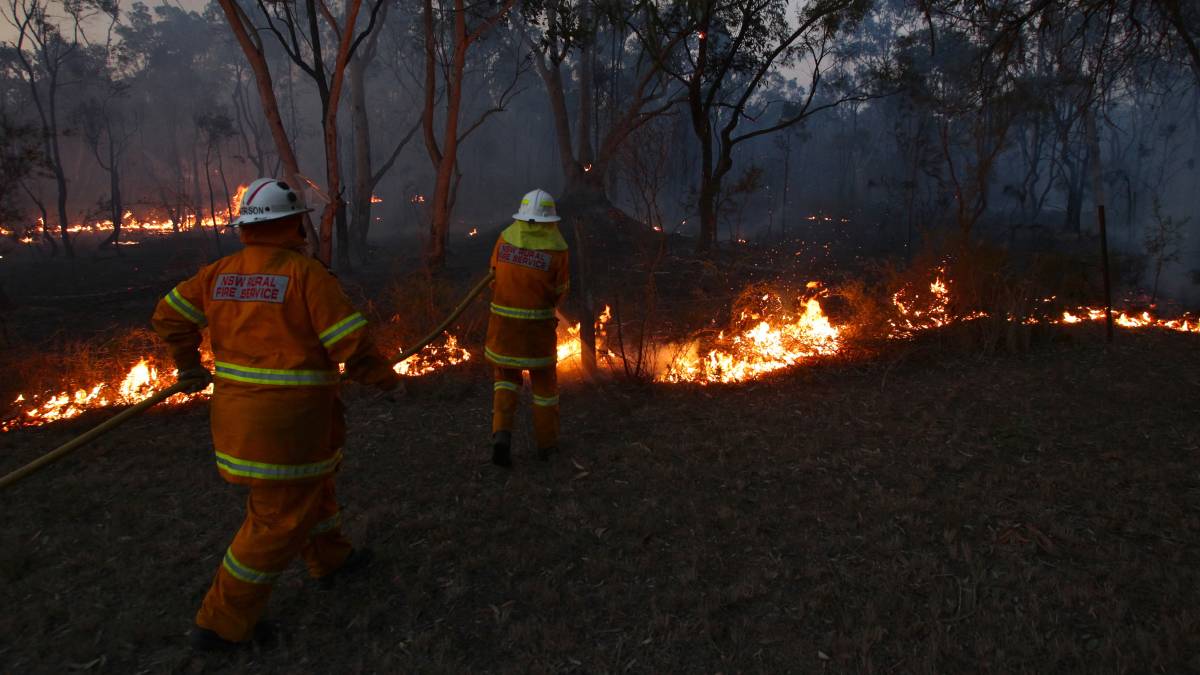 Rural Fire Service crews from Sutherland and Loftus keep an eye on the flank of a bushfire near Londonderry. Photo: DALLAS KILPONEN 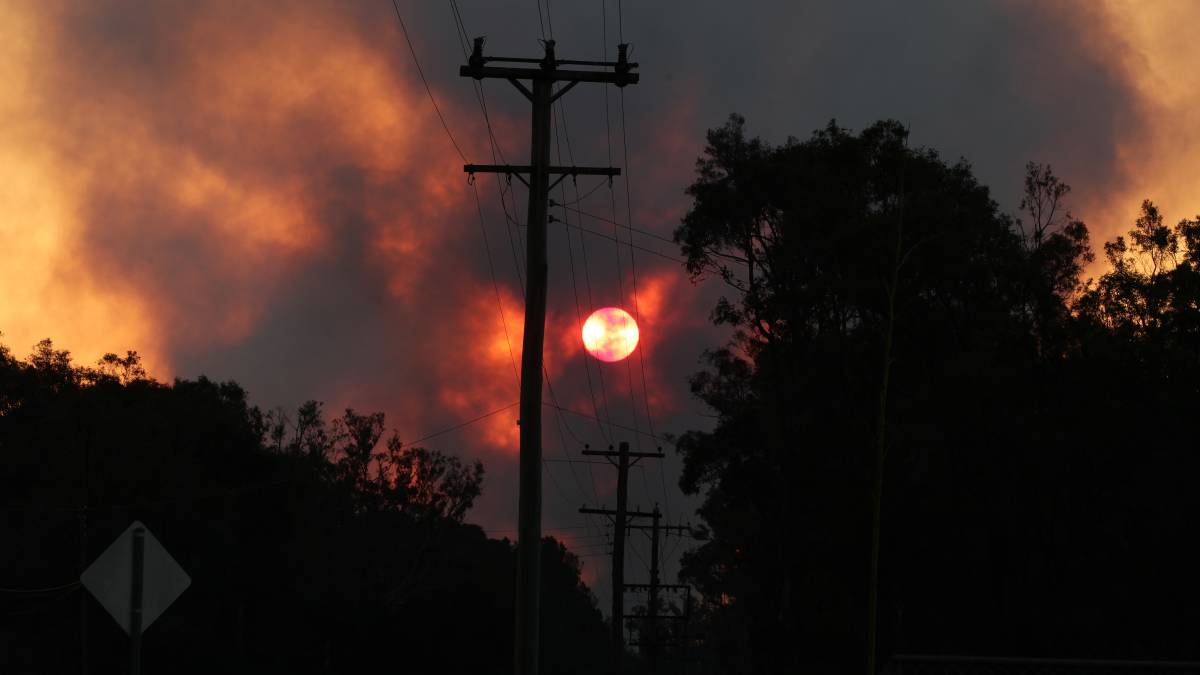 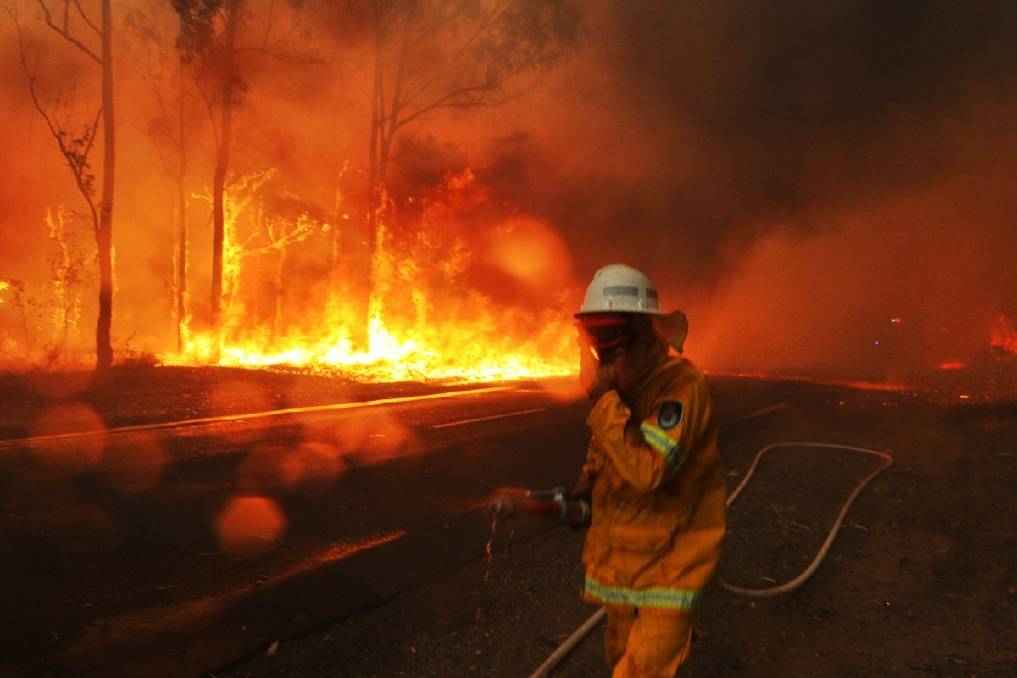 City office workers might have complained about smoke in their eyes and nostrils on Tuesday afternoon but on Sydney's north-western fringe, firefighters were engaged in a running battle to save lives and homes as the summer bushfire season kicked off with terrifying scenes.

By 6pm, the Rural Fire Service said there were 63 fires burning across NSW - 31 of them uncontained - with four major fires at the highest emergency warning level, meaning property and lives were under direct threat.

Suburbs, including Castlereagh, Winmalee, Hawkesbury, Marsden Park and Windsor, were under siege, with two homes lost - one at Hawkesbury Road at Winmalee (in the Blue Mountains) and another at Marsden Park (in the Blacktown area).

Two fire fighters had to be treated for burns while five others required treatment for serious smoke inhalation.

The fires kicked off on the back of the warmest overnight and day temperatures recorded in Sydney so early in spring in more than 100 years.

Fairfax Media photographer Nick Moir captured frightening images on the fire ground, even witnessing fire fighters having to abandon their truck as flames rushed up to engulf the vehicle.

He described the fires as "very erratic", with fast-moving grass fires and dry weather over the past month causing serious problems.

"The winds are changing direction erratically," he said.

"The RFS, they're finding it very hard to put units in front of fires because it's erratic bushland here. They'll jump on one outbreak and the next second the plot down the road is on fire."

Meanwhile in the CBD, the NSW Premier, Barry O'Farrell, asked the public to remain patient in areas where fire was affecting traffic and electricity supply.

"It's clear that there is serious fire risk in the western parts of our city," he told the Parliament. "I would hope that the public, motorists and households affected by power outages are patient."

He said 999 firefighters have been involved in the effort on Tuesday.

The NSW Rural Fire Service said the cause of the big four fires in Sydney's west will be investigated. The causes of each blaze are still unknown.

As night began to fall, residents in Windsor in Sydney's northwest continued to help fight a bushfire just metres from their homes. 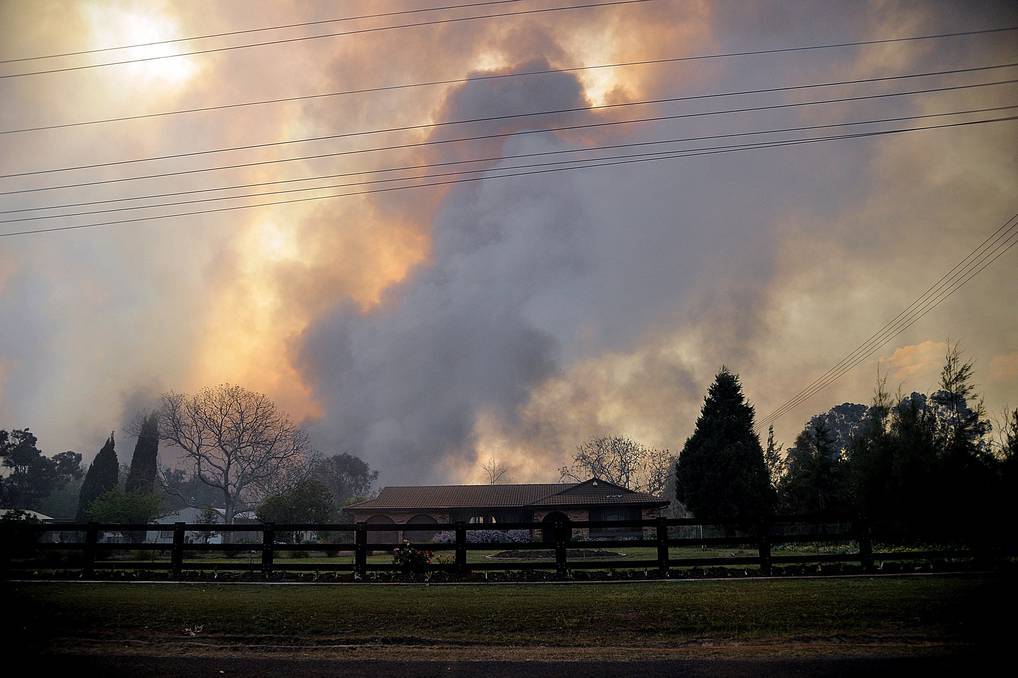 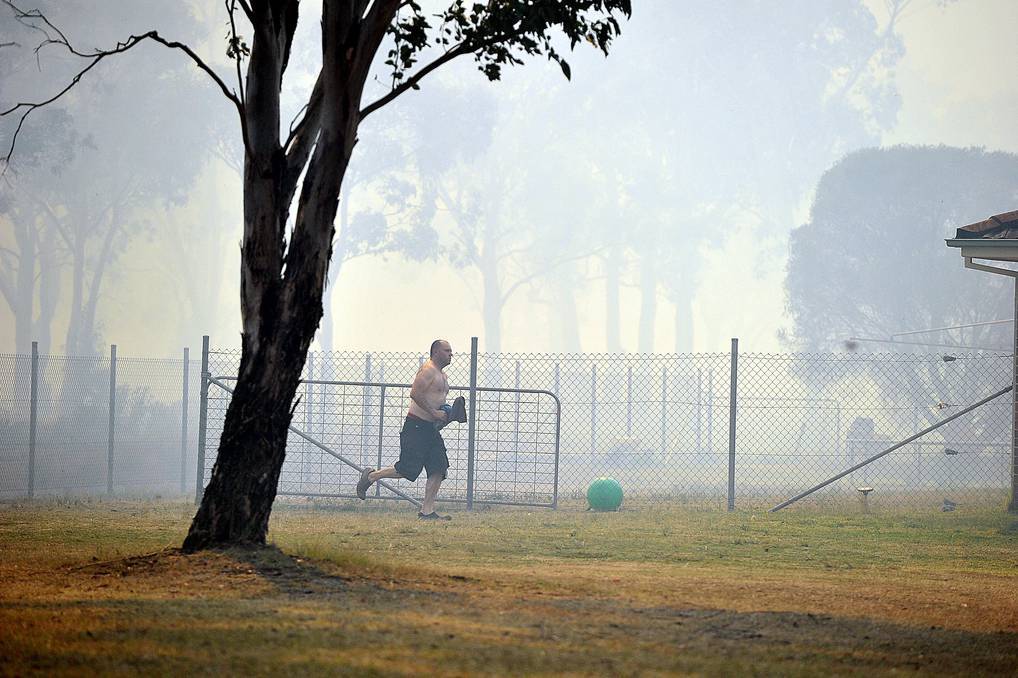 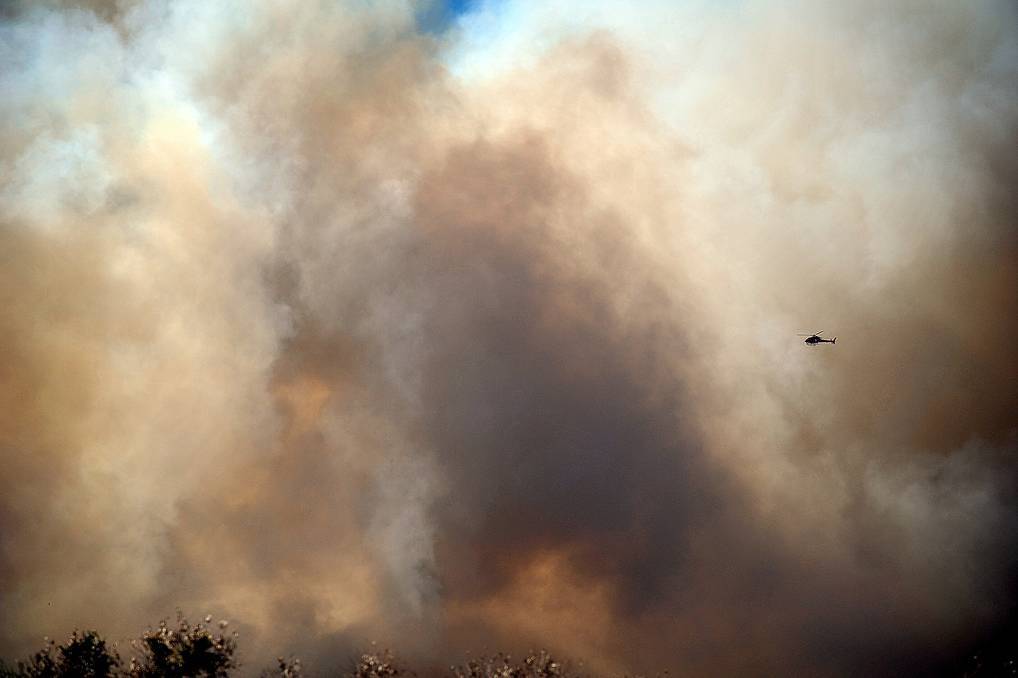 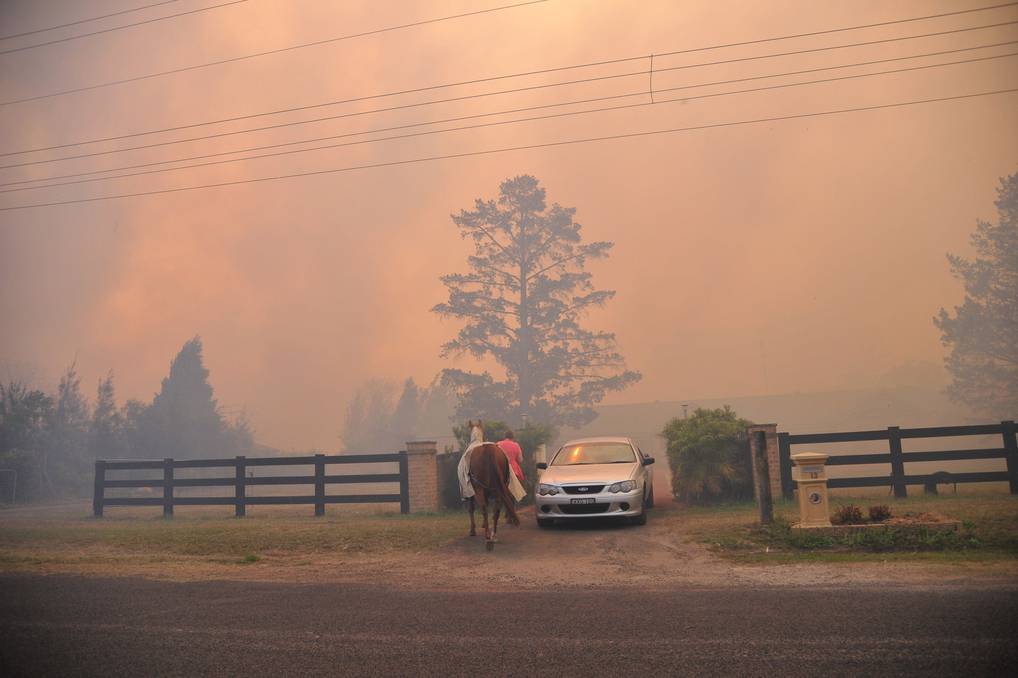 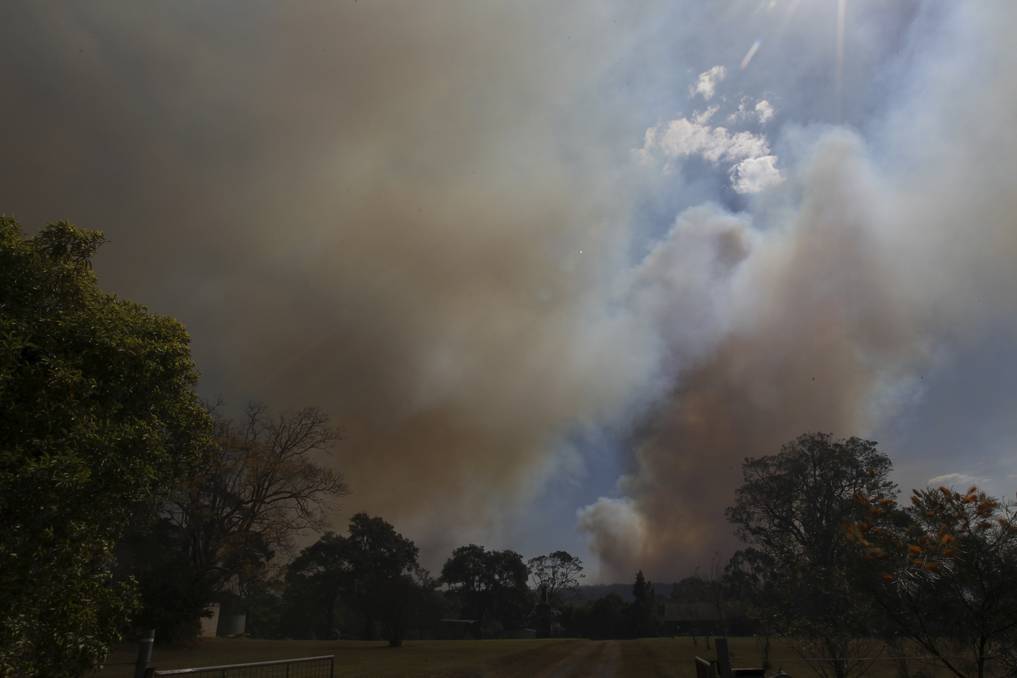 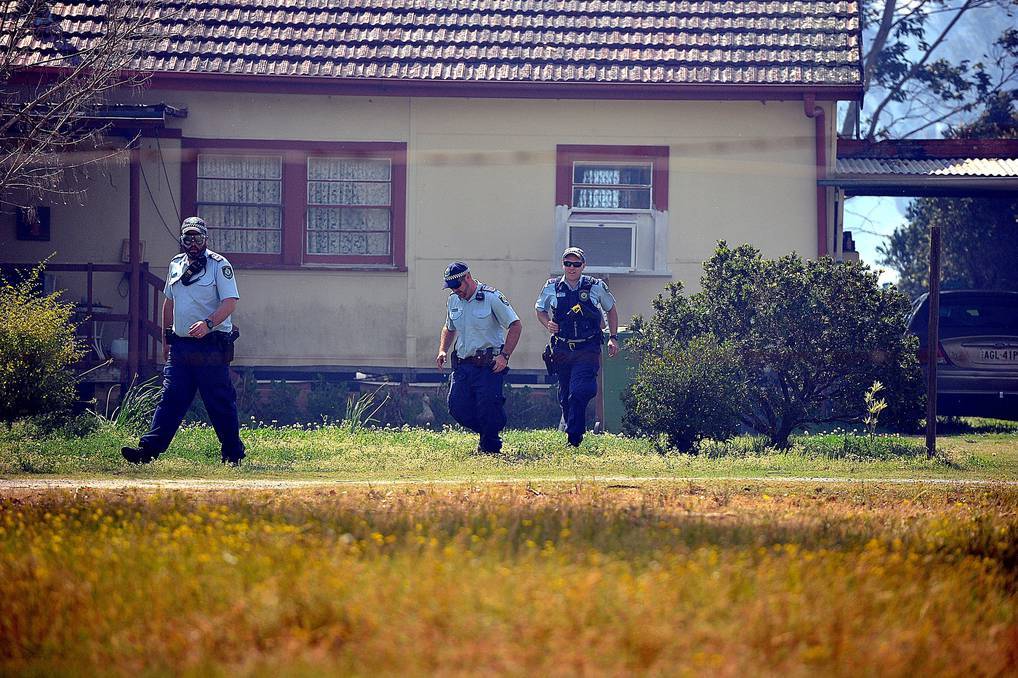 Smoke billowed over Windsor Downs Nature Reserve as water-bombing helicopters and crews battled grass fires fanned by winds of up to 80km/h.

Sanctuary Drive residents Michael and Sandra Bellamy left work early to return home to protect their house when they realised there was a fire in the reserve bordering their property.

"I got a text message from my daughter saying that I should probably go home," Ms Bellamy told AAP.

However, police road closures prevented her from reaching the home in which they have lived for 19 years.

"I wasn't allowed in. Then my neighbour came by in the car and said, 'quick, get in' and I jumped in," she said.

Her husband, Michael, was confident fire fighters would be able to contain the bushfire..

"These guys are here to stop it in its track if it does come this way," he said.

"The wind is a bit of a worry, it's swirling around a lot. We don't know where it will end up, and we're still not sure."

Many residents had fireproofed their properties ahead of bushfire season, he said.

Endeavour Energy said about 730 homes were without power, but it was trying to restore power to 500 homes around Londonderry and Cranebrook later on Tuesday night.

However, burnt infrastructure at Winmalee meant about 230 homes in the region were likely to remain without power overnight.

The grass fire burning around Richmond Road and Bennett Road at Windsor has been downgraded to "watch and act" by the NSW Rural Fire Service.

However, there was still the potential for fire to impact on properties around George Street and Bligh Park.

Earlier, Orica evacuated its plant at Ravensworth near Muswellbrook in the Hunter Valley, after a small blaze erupted about two kilometres away.

Warnings had already been ringing out ahead of the start of summer, with most of the eastern NSW, the ACT and western Victoria being told to expect above-average fire activity this summer as warm weather dries out forests and winter rain adds fuel in grassland regions.

“Large areas of southern Australia, especially along the east and west coasts extending inland, face above-normal fire potential for the 2013-14 fire season,” according to the Southern Australia Seasonal Bushfire Outlook released by fire authorities and the Bushfire Co-operative Research Centre.

The 31.6 degrees reached just before 1.30pm on Tuesday was the warmest since March and almost 12 degrees above the long-term average for September.

Wind gusts reached 70 kilometres an hour at Penrith just after 1.30pm, and 78 km/h over the harbour in the late morning. The winds dragged some of the smoke from a nearby fire into the Sydney basin, adding to allergy woes triggered by high pollen levels.

Since the record 45.8 degrees reached in January, Sydney has had just four days of 30-plus degrees days, half of them this month alone.

The city also posted its 18th consecutive day of 20 degree or warmer weather on Tuesday, and will match the record such run on Wednesday for so early in the season. The Bureau of Meteorology is forecasting at least another day of such weather before cooler weather arrives.

Heat building over central Australia will continue to keep temperatures above average for most of the next fortnight, said Ben Domensino, a meteorologist with Weatherzone.

While the weather models are indicating no early return of 30-degree weather for the city, Sydney should continue to see warmer than normal conditions for most of September and October, Mr Domensino said.

“We're expecting less rainfall than we would typically see” for most of spring, he said.

Sydney has already had its warmest start to any year and its mildest start to spring. So far this month, the average maximum is tracking about 1 degree higher than the previous hottest September set back in 1980.