The 27-year-old animal rights activist has made waves in Australia - particularly in Perth - for the last four years.

After her recent protest at the Perth Royal Show, Tash was grabbed by her shorts and pushed against a fence by a farmer, which left her bruised, and social media crawling with opinions.

Mandurah Mail reporter Samantha Ferguson met with Tash for a no-holds-barred talk about her controversial protests and how her reputation has impacted her life.

When Tash arrives at the coffee shop for our meeting, she doesn't look like the 'public enemy number one' reputation she has been given.

She's warm and inviting and orders a coffee - with soy milk, of course.

Tash said she was introduced to veganism by a friend who had become vegan for health reasons.

"She was talking about the benefits of a plant-based diet, which didn't quite paint the picture of veganism, but I was intrigued by plant-based, I'm a health conscious person so I thought I'd consider it."

After getting online to research, Tash responded in a way that would surprise many.

"I remember reading the definition of veganism, and that vegans don't consume or use any animal products and I thought 'f**k that' - that just seemed insane, that seemed impossible to me."

It wasn't until a month later that she stumbled upon the film Food Choices and decided to make the switch overnight. 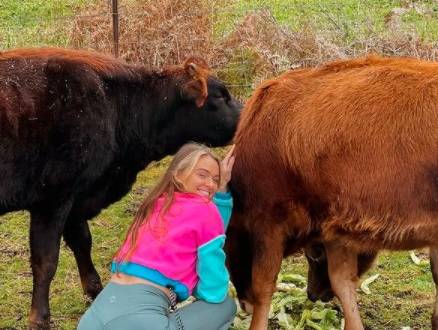 "I realised I had been lied to my entire life. As someone who loves animals and the planet, I was going completely against my values.

"I grew up always having such a strong connection with wild animals from swimming with dolphins out in the ocean to being with quokkas at Rottnest, I was always an environmentally conscious child.

"So realising this truth at the age of 23, I knew I could never contribute to these industries again."

A drop in the ocean turns into a storm

Tash told me her dream from childhood was to become a marine biologist, after spending the majority of her childhood on trips with her family where they would snorkel and spend time in the ocean.

"I was like a little fish in the ocean to be honest, I just loved spending hours snorkelling with dolphins, turtles and fish.

"I grew up along the coast of WA and had such a connection with animals. Our family would take yearly trips to places like Exmouth to spend time in the water.

"I had such a connection with fish - on our holidays I was making friends with fish.

"Even when I was younger, I had this disturbing thought that I'm loving these beautiful animals out in nature but I'm putting the bodies of dead farm animals on my plate."

"I started having these conversations, it was quite mellow and people had the option to engage.

"It's not like what I do now, which is very disruptive - people have to listen.

"In that sense transitioning from that form of activism to this disruptive activism has been empowering." 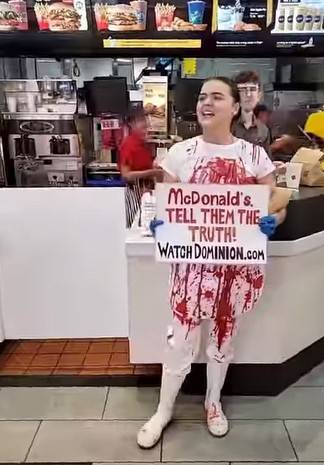 Tash said this form of 'disruptive activism' gave her access to a media platform she never had access to before.

"I love all kinds of activism but that form is making such a big impact - especially the media attention, it's something Perth had never really seen before."

While Tash maintained that the disruptive activism made her feel empowered and heard, the general public has balked to her methods, which have included attending butcher shops and restaurants smeared in fake blood holding prosthetic pig heads and storming high fashion stores almost naked to protest the materials they used in their clothing.

"Disruptive activism has been used throughout history for various social justice issues," she said, when asked why her means are so confrontational.

"It is the most powerful weapon for social change."

The dark side of disruptive activism

Tash admitted that her methods cause a great deal of anger to the public, with many of her protests ending in her being forcibly removed from the location.

"I've been assaulted on numerous occasions from staff members of supermarkets and butchers and the general public too," she said.

"Most of them are older, larger men who... think they are able to do that because the majority of the public hate me.

"That's when you know they are coming from a place of anger - which I completely understand in many circumstances.

"Because someone is coming into someone else's business trying to bring attention to something which is all they've known their entire lives and they feel threatened by that.

...people are going to think' well I can do that to her and no one will care because it's Tash Peterson.

"I have nothing inherently against these people, this is just the world we were brought up in - I don't hate these people, I don't hate people who eat animals - people think that I come in with so much hate and that I just want to scream at people.

"I just want to convey a message, I'm speaking up for animals who can't speak up for themselves."

Other responses to her protests have included death threats, her home address being leaked, and people showing up at her home.

"I've had people come to my house and throw meat and cheese all over my car and bones in my driveway.

"I have actual screenshots of death threats I have received."

It's not okay just because 'it's Tash Peterson'

Tash said she believed the concept of toxic masculinity played into both the meat, cheese and dairy industry and the hate she receives on social media.

"The older men on my posts, making misogynistic and disgusting comments, they're probably threatened by me, a woman.

"They use body shaming, slurs - I think the meat industries have used toxic masculinity by making men think they need to consume flesh to be masculine - being a vegan man is seen as a weak thing when it's the opposite."

Tash's more recent protests which have seen her being physically grabbed and pushed have made her decide to pursue further action towards filing an official report.

"I've had some bad experiences - I've been told I was bringing it all upon myself.

"A big issue is, the moment someone hears my name, they have this preconception of me that I'm this insane, violent person and they don't want to help me.

"If nothing gets done about it, people are going to think, 'well I can do that to her and no one will care because it's Tash Peterson'."

Along with these incidents at protests, a number of social media comments left on her posts have insinuated the intent to harm Tash, something she says people feel comfortable doing because the general public don't like her.

"As you've seen from comments online people are cheering that I've been assaulted - it's not just men, it's females as well.

"I'm also doing this for the safety of other activists."

When asked what her endgame was, and what she was working towards as a result of her protests, Tash answered swiftly and confidently.

She agreed that her disruptive activism had led to scrutiny and endless court battles, but said she always brought it back to the animals.

"A world where we see humans and non-humans as equal, because we are all sentient beings at the end of the day.

"Anthropocentrism is so ingrained in society that non-humans are not even seen as victims.

"I'm not asking for animals to be given the right to vote - just for them to live free from harm.

"It's time for us to evolve. We can thrive and survive on plant based options. We can live without harming animals."

While Tash admitted her methods were intense and caused some disturbance to the public, she said it was the way in which she could reach a global audience.

"And I think that's the main purpose of the disruptive activism to get that media attention, to reach people across the globe with this message and hope that they will educate themselves and watch documentaries like Dominion."

Tash also said she wanted to find the time to get back into doing the things she loved, and agreed that many people who read about her in the media knew nothing about her as a whole, and didn't realise she was a person outside of her activism.

"I have a degree in outdoor recreation, I've been surfing for most of my life. I have qualifications in rock climbing, hiking, navigating and kayaking.

"I've given up a lot of those passions to be a voice for non-human animals.

"Beforehand my life was very busy, especially in summertime - I'd be working non-stop swim teaching during the day and doing lifeguarding shifts at night while trying to figure out the next protest. I didn't have time to focus on my passions.

"I'm very fortunate now to have enough financial stability to work in animal rights fulltime - hopefully I can get back to nature and other things I love doing."