Who else has a love/hate relationship with kitchen appliances? You've spent years making pies, but look, here's a machine that can make them for me, and just when you've mastered it, oh look, a shiny new air fryer, oh look, a machine that makes sausage rolls.

If your kitchen is anything like mine you'll have a few appliances tucked away somewhere. Some you use regularly, like the slow cooker; some get rolled out once or twice a year, like the ice cream maker (rethinking here, given the prevalence of them on MasterChef this year - green olive ice cream anyone?); some you used once and they were put away, never to be seen again. I know there is a fondue set somewhere.

According to a recent survey on behalf of Uncle Tobys, more than five million Australians regret wasting money on kitchen gadgets. The average spend is $136 per item, which means over the years, we've spent more than $707 million on unnecessary gadgets. 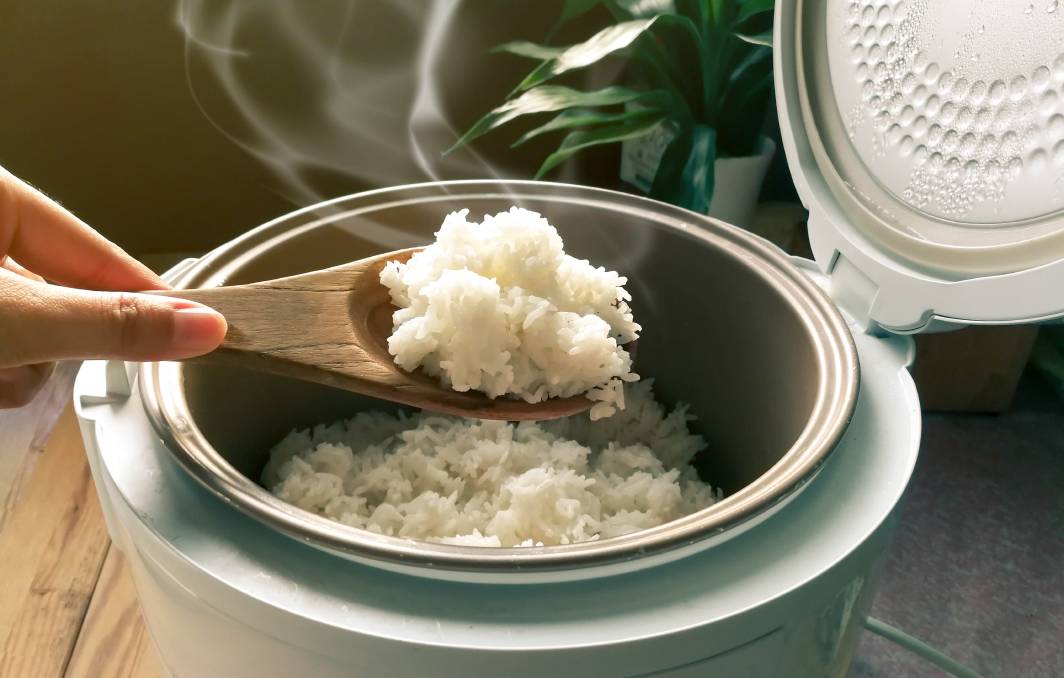 The rice cooker is one appliance you can keep. Picture: Shutterstock

Hayden Quinn, foodie, surfer, MasterChef alumni and host of Taste of Australia, is more at home cooking over an open fire with a cast iron pan, with not a lot more than a knife and a chopping board.

"I do a lot of cooking outside and there's nowhere to plug anything in," he laughs.

At home, he does admit to loving his rice cooker and his mandoline.

"And I can't say no to a jaffle maker, particularly on a cold morning with a can of baked beans - all those memories of childhood."

He acknowledges that people are busy and the lure of time-saving devices is real. 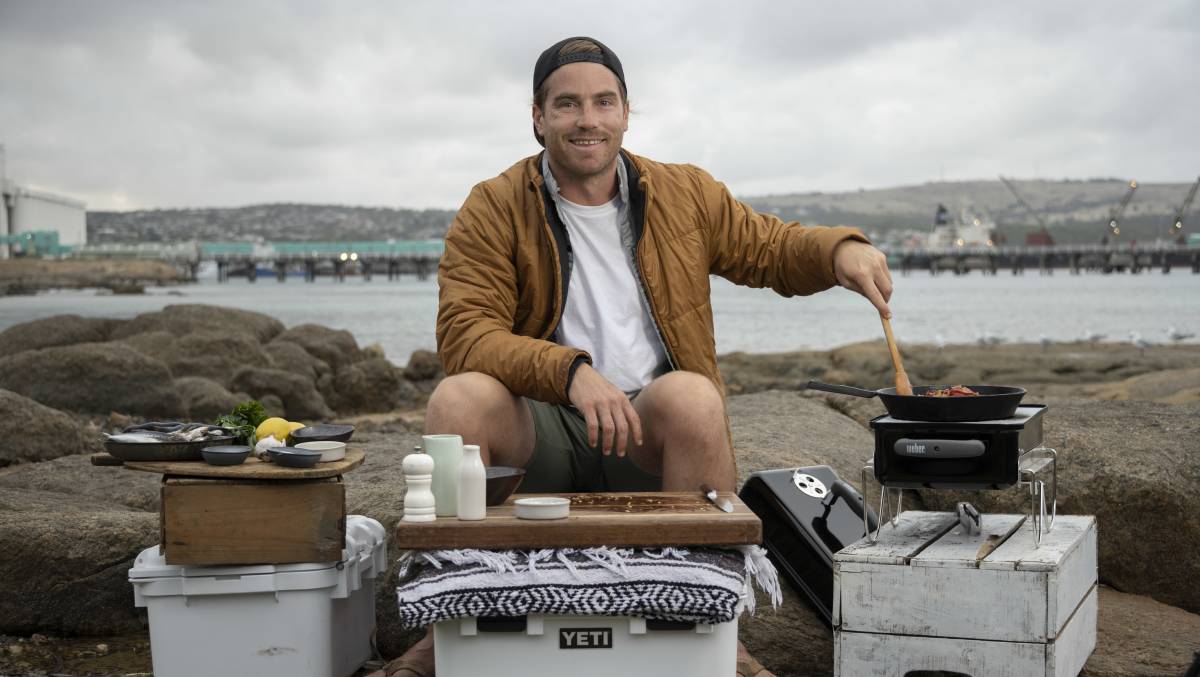 "Plenty of people have kids and lots of different activities to get to, if they think something can make their life a little bit easier, of course they're going to be interested in having a look."

At the other end of the spectrum, there are those gadgets that are quite niche. He takes it on the chin when I suggest MasterChef is partly to blame; this season it's been the ice cream maker front and centre, the benchtop hibachi is always an omnipresent threat. And do we really need a sous vide at home?

"The short answer to that one is no," says Quinn. On his website haydenquinn.com.au he lists his kitchen essentials, from a few good knives to some mixing bowls. The only thing which comes close to being classified as an appliance might be a can opener, or a set of scales.

So if he had only one appliance to invest money in, what would it be?

"I love my stand mixer. I don't use it as much as I would like, but I love a relaxed Sunday of baking cakes and such. A good stand mixer will last you a lifetime.

"That's a good tip overall: if you want something to last, buy a good quality brand. You're better off buying something that costs $400 and lasts you 10 years, than buying a $20 appliance that lasts a few months."

He says appliances that do more than one thing are a good buy, particularly if you have a small kitchen. I wonder what he thinks of the toaster that also cooks an egg? That gadget is either taking the mickey, or is a stroke of genius.

"You have to think about available space," he says. "If you really only have room for one or two things on the benchtop, what will you use the most?"

Which brings us to the whole point of this interview. My cupboards need a clean out. Quinn was more than happy to go through my purchases, recent and otherwise, and tell me what gadget should go, go, go.

Quinn's verdict: Gone. If you've got a jaffle maker you don't need a pie maker.

My defence: But it's not just for pies. People are making doughnuts, French toast, dumplings, even sausage rolls in a pie maker. And they're making Chiko Rolls in a sausage roll maker.

Quinn's verdict: Gone. It's a fad. Use a knife.

My defence: Don't tell Pete Evans. And I like zucchini noodles and have aspirations of healthy poke bowls for lunch. Keep your slow cooker, particularly ahead of the cooler months. Picture: Shutterstock

Quinn's verdict: Keep. You can have a lot of fun with an ice cream maker, particularly in Australia. There's so much you can do with it. And they're pretty easy to use.

My defence: Maybe it's time to try some MasterChef flavours - bacon and egg ice cream or black olive ice cream.

Quinn's verdict: Definitely keep. I love my mandoline. Tip number one, don't cut your fingers off. A lot of them come with different blades so you can do julienne and different shapes. If you're doing a green mango salad or carrot for a banh mi, or something, it's much better than that spiraliser.

My defence: Thanks for the tip, the tip of my finger. Almost lost it at Christmas lunch a few years ago, after a few Christmas morning cocktails. I've got a Tupperware one which is a cracker. Takes potato bakes to a new level, does excellent vege strips for salads, it even makes crinkle cut chips. Use it often.

Quinn's verdict: Gone. You should be doing normal cooking. It's just not my vibe. It depends on what school of cooking you're from, for me it's all about the process. Some people swear by risotto in a thermo but half the point of a risotto is standing over the pot, with a glass of wine, stirring and paying attention to the rice.

My defence: Beware the cult, Hayden. Thermo appliances divide a nation. I know a woman with two. She uses them every day to make dinner, but also to make things like preservative-free dog food, cleaning products, skin care products, and even mills her own flours and spice mixes and sugars. I test drove one a few years ago and was almost lured over to the dark side.

Quinn's verdict: Keep. So many different things you can do with the modern ones. From pestos, to doughs, grating, blending.

My defence: Agree. I use mine for everything. Grating cheese, mixing cakes, chopping onions. Not all at the same time. It has a blender attachment too which is great for milkshakes and soups. Quinn's verdict: Keep. So versatile. Mine has attachments for pasta making which is great. (You can even get attachments which mince, sift, slice and shred, juice and spiralise). Go hardcore and get the ice cream maker bowl or food processor attachment.

My defence: Excellent. I love cake.

Quinn's verdict: Definitely keep. Most underrated appliance in the kitchen. It's golden. Try classic baked beans and cheese or creamed corn. Some of our top chefs are mixing things up and putting them on the restaurant menu.

My defence: With you there. Have you been to Melted or Intra here in Canberra? I like ham, cheese and mustard.

Quinn's verdict: I have a multi-function one which I mainly use as a pressure cooker. I also have a traditional slow cooker, the old classic kind of crock pot. If I had to choose one I'd choose the bog standard slow cooker, throw everything in the morning and come home to fall-off-the-bone lamb shanks.

My defence: Give me a bog-standard slow cooker any day, although I have recently updated to a version which sautes as well. Slow cookers are the appliance du jour. Just not for curries and soups. People are making desserts, soups, drinks, sauces and salads in them. People with air fryers swear by them? Do you have one? Picture: Shutterstock

Quinn's verdict: Not sure. I haven't used one. But everyone seems to have one. I like the idea of a handful of fries or some curry puffs.

My defence: I don't have one either but friends who do swear by them. Are they the new thermo?

Quinn's verdict: Keep. I do love a third drawer full of random bits and pieces. I have a julienne peeler - when you peel with it, it comes out in ribbons. It travels with me everywhere.

My defence: Me too. I love a random drawer. That cherry pipper gets a workout every Christmas and whenever I get the urge for a clafoutis. There's an apple corer in there somewhere, and a palette knife, a couple of mini whisks. Growing up, my mum had a bean peeler. There was a little blade on the end to top and tail the bean and then you pulled the bean through it and it sliced the bean into strips. Very fancy. We must have eaten a lot of beans.

Quinn's verdict: Keep for sure. The one thing I can't do without. We use ours two to three times a week and it makes the best rice.

My defence: Definitely keep. I've had mine for close to 15 years. It has a timer function on it and saved many a post-sport training dinner when the kids were little. Hot rice ready to go. I saw a recipe for macaroni and cheese cooked in the rice cooker the other day. That's the next recipe to try. 1. Make the labne a day ahead. Mix the yoghurt with the salt and pour it into a sieve lined with muslin set over a plastic container. Leave to hang overnight to extract all of the whey. Transfer the thick labne to a plastic container and store in the refrigerator until needed. Discard the whey.

2. In a large cast-iron or heavy-based saucepan, gently fry the onion, chilli and garlic in the oil for a few minutes over medium heat until translucent. Raise the heat to medium-high and add the lamb. Brown it off and mix with a wooden spoon until all the juices have evaporated. Just as the meat starts to catch on the bottom of the saucepan, add the tomato paste and fry for another minute or so. Add the chicken stock to deglaze the pan and stir. Reduce the heat to low and simmer gently for about 10 minutes or until all the liquid has evaporated. Remove from the heat and leave to cool. Add the pine nuts, spices and herbs and mix well. You can make all sorts of sweet treats in a pie maker. Picture: Supplied

4. Place cooled tart cases on a tray; pour a scant 1/4 cup custard filling into each (be careful not to over fill, there should be a 2mm gap below tart rim).

5. Place custard tarts back in pie maker holes. Close lid; cook for 10 minutes or until custard is set. Remove tarts; transfer to a wire rack to cool. Repeat with remaining custard tarts.

Tip: Custard tarts are best served on the day they are made, but will keep stored in the refrigerator for up to three days.

This story Is this the most useless kitchen appliance? first appeared on The Canberra Times.

Discuss "Is this the most useless kitchen appliance?"

Discuss "Is this the most useless kitchen appliance?"