When former MasterChef champion Diana Chan gets together with her family and friends, there's one topic guaranteed to be on the agenda.

"When Asians get together, especially Malaysians, when we get together, we're always talking about food, 24/7, if you're not a foodie, you might feel a bit left out," she said.

And that's exactly what she's done for season two of Asia Unplated which premieres on SBS Food on Thursday, January 28 at 8pm - gathered family and friends to talk about food.

The series follows Chan as she explores the fresh, aromatic flavours of Asia in the company of special guests.

Across 10 episodes, she cooks up simple but authentic, home-style Asian dishes. From the sweet, sour and salty flavours of Cambodia to the fragrant spices of Sri Lanka to her personal favourite, Malaysian street food, the series is full of new and exciting recipes that are guaranteed to surprise.

Along for the ride are chefs Jerry Mai, Jacob Leung and Ross Magnaye and Masterchef alumni Khanh Ong, Sarah Todd and Karlie Verkerk among others.

"It's perfect to have this mix of professional chefs and home cooks, they come in as guests and everyone brings a very different offering," she said.

"The chefs might approach it from a technical point of view and then the home cooks will get nostalgic, talk about what their parents and grandparents did, what's been served in the family for years.

"When people watch these shows, it's just very relatable because somehow you will find that sort of common ground when you're either listening to the guest or to myself, and we talk about the history and why we do certain things a certain way."

Chan grew up in Malaysia and has always loved cooking but when she came to Australia to attend university her interest grew as she discovered the farmers' markets and all Melbourne had to offer.

She was working as an accountant for Deloitte, climbing the corporate ladder, and would feed her foodie passion by entertaining her friends. At the insistence of these well fed friends, she entered MasterChef in 2017 as "a bit of fun". She ended up winning, beating Ben Ungermann by one point, and life was never the same.

"I did go back to my accounting job for about three months but it all got a little hectic and I knew what path I wanted to take," she said.

"Asian cuisine is so broad, it's the biggest continent in the world, it's got so many different countries, from the west to the east, north, south, it's all very different," she said.

"And then you break it down into regions, like Southeast Asia, which itself has got so many different cuisines, Thai and Vietnamese, they're right next to each other but they're so different in so many ways, and so similar in so many ways.

"The premise of the show is just explaining that sort of difference and how it's sort of all intermingled, integrated together at the same time.

"The laksa is a perfect example, a lot of people seem to think there's only one kind of laksa, in Malaysia alone there's about nine ... there's such a difference in variety, even within the one country."

She's been lucky enough to travel widely throughout Asia, sampling different cuisines along the way, visiting markets, talking to cooks, but she's happy to admit she doesn't know everything about Asian cooking.

"I know Southeast Asian cuisine pretty well but I'm still not an expert," she said.

"I do a lot of research and having the guests come in, I learn so much."

Cambodian and Laotian cuisines were ones she wanted to explore more.

"I have travelled there but I didn't know too much about them. But having Jerry Mai to help me with those episodes was incredible. She has family connections there still and to get that understanding was a real treat."

She said the home cook shouldn't be afraid to experiment with Asian cuisines they were unfamiliar with either.

"Australians love Asian food, there's a long history, but look into ones you might not be familiar with and who knows what you might discover," she said. 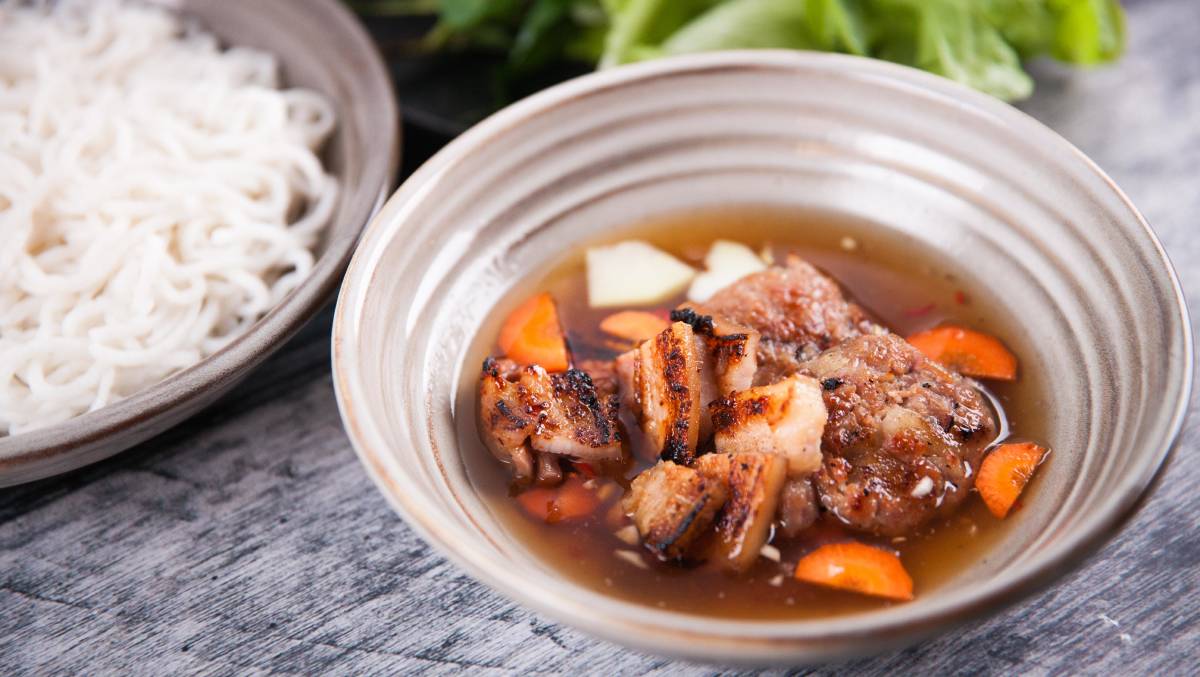 1. For the marinade, combine all the ingredients in a small bowl.

3. Meanwhile, for the pickles, combine the sugar and warm water in a bowl and stir until the sugar has dissolved, then add the vinegar. Place the green papaya and carrot in a bowl, pour over the pickling liquid and set aside for at least two hours, ensuring the ingredients are fully submerged.

4. For the noodles, place 80g rice flour, salt, oil and 750 ml of water in a saucepan. Use a whisk to combine well, ensuring there are no lumps. Place the saucepan over medium-high heat and stir continuously with the whisk until the mixture is thick and smooth. Remove from the heat and stand until cool.

5. Place the tapioca starch, xanthan gum and remaining rice flour in the bowl of an electric mixer. Stir on a low speed to combine. Once the rice mixture has cooled, add to the flour mixture and beat on low speed until the dough comes together. Use a spatula to scrape down the sides, then mix on a higher speed until the mixture comes together into a smooth, wet dough - you don't want the dough to be too dry as it will prevent it from coming through the ricer.

6. Bring a large saucepan of water to the boil. Prepare a large bowl with ice and cold water.

7. Working in batches, put some of the noodle dough into a potato ricer, using the smallest holes of the ricer. Press down to ensure there is no air, this will ensure you will get long noodles. Stir the boiling water to form a whirlpool, then squeeze the noodles into the water. Gently shake the bottom of the ricer in the boiling water to break off the noodles. Cook the noodles for a few minutes or until they float to the top. Remove with a slotted spoon or tongs and place in the iced water. Repeat with the remaining noodle dough until all of the noodles are cooked. Drain the cooked noodles, then rinse thoroughly under cold water to remove the starch.

8. Roll the minced pork mixture into golf ball-sized balls. If time permits you can then return to the refrigerator for one to two hours to firm up.

9. Preheat the charcoal grill. You can use a barbecue grill for this dish, but you won't achieve the same smoky flavour.

10. For the nuoc mam, warm the chicken broth in a small saucepan over medium heat. Place the warm water and sugar in a bowl and stir to dissolve the sugar. Stir in the fish sauce, vinegar, garlic and chilli.

11. When the charcoal is ready, slightly flatten the pork balls using the palms of your hands, then transfer to the grill. Carefully add the pork belly, being careful of the flare ups from the fat dripping onto the charcoal. which will make the meat black and bitter tasting. Cook the meatballs and pork belly, turning regularly, for 7-10 minutes or until cooked through.

12. To serve, place the cooked noodles and salad ingredients on a large serving platter. Drain the pickles and evenly divide among the small bowls. Add the meatballs and pork belly and evenly pour over the warm chicken broth and nuoc mam, finishing with a little pepper on top. Invite guests to dip a few noodles and herbs into their broth and eat, followed by mouthfuls of the meat and pickles. 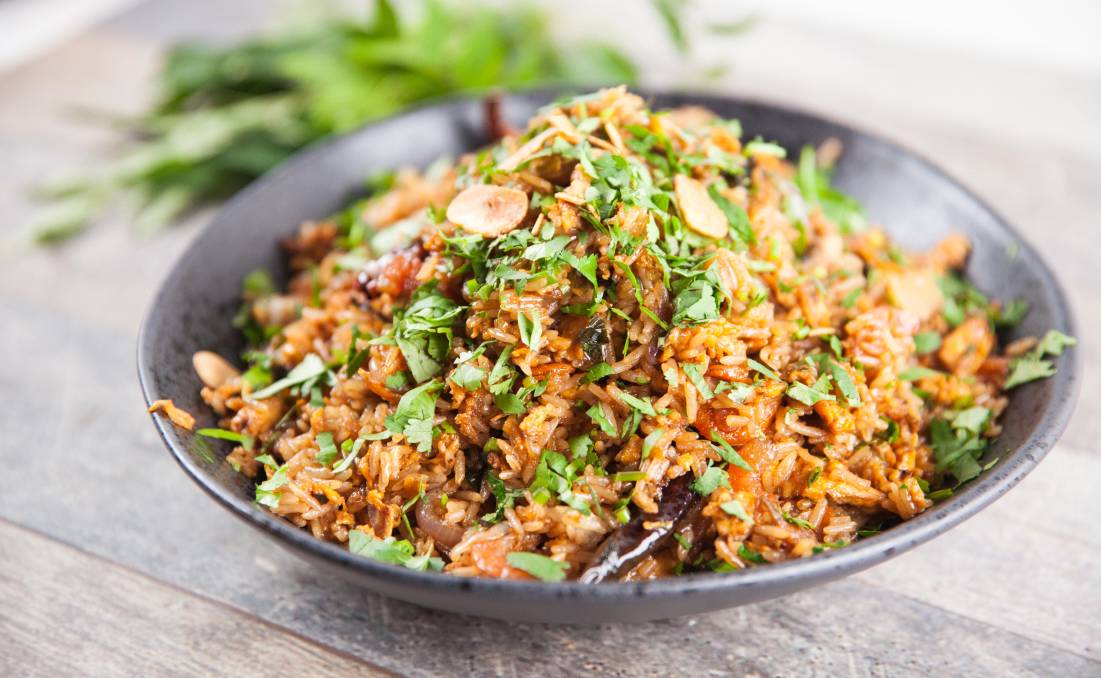 This recipe was given to Jacob Leung by his mother, who adds curry leaves, kecap manis and fried garlic for a distinctly Malay touch.

2. Using the same wok, add the eggs and scramble. Once cooked, add the rice and break it up. Then add back the curry leaves, chilli and shrimp. Mix in the soy sauce, kecap manis, shallots and garlic. Serve immediately.

This story Exploring the many tastes of Asia first appeared on The Canberra Times.

Discuss "Exploring the many tastes of Asia"

Discuss "Exploring the many tastes of Asia"