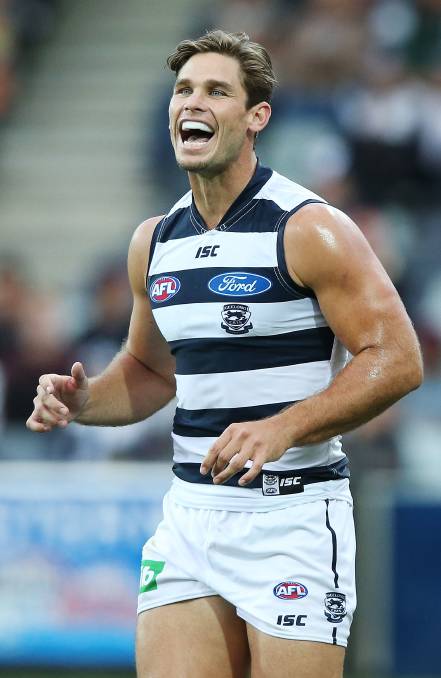 Port Adelaide will need to keep a close rein on Geelong's Tom Hawkins if it is to progress straight through to the preliminary final. Photo: Michael Dodge/Getty Images

There's been no small amount of internal back-slapping going on at the AFL this week, and given the circumstances, with pretty good reason.

That we've had a football season at all is a minor miracle. To even have got through 153 home-and-away games has been some feat of logistics and planning.

Now, comes the best part. Finals. And there's an argument these coming few days are the best on the footy calendar. Four finals to be played over a 72-hour period, two of them cut-throat affairs, two for the considerable prize of an automatic berth in a preliminary final. And some fantastic, appetising match-ups. Let's take a closer look at the menu.

Port Adelaide spent every week of the regular season on top of the ladder, winning 14 of 17 games, and is playing on its home ground. It will justifiably start favourite against the Cats. The "buts", however, remain considerable.

Chief among them, is the fact that in their home and away clash in round 12, Geelong didn't just beat Port, but put it to the sword, winning by 60 points and holding the Power to just four goals, easily their heaviest defeat and lowest score of the season.

Port, officially the AFL's stingiest defence in 2020, allowed the Cats 14 goals, Tom Hawkins on fire with six and giving key defender, Tom Clurey, a tough evening indeed. At the other end, veteran Cat Harry Taylor gave Charlie Dixon not even a sniff, the contrast in either zone best reflected in the marks inside 50 tally of 18-2 in Geelong's favour.

The Cats stifled Port's run, and the Power's midfield, Travis Boak aside, was taken apart by the likes of Patrick Dangerfield, Cam Guthrie, Sam Menegola and Mitch Duncan. None of which to say a repeat is on the cards. And the benefit to Port of the venue, this time at Adelaide Oval, is obvious.

But at the very least, Port needs to make the midfield battle a tighter scrap, and keep a far closer rein on Hawkins. Doing so would give the Power a better than reasonable chance of reaching a preliminary final for the first time since 2014.

Finals ideally bring together two very evenly-matched teams. In this case, it's second versus third. But evenly matched? Consider that Richmond's winning streak against the Lions is 15 games, easily the longest current stretch of dominance in the AFL. That said, Brisbane doesn't enter this attempt at ending that string of defeats without considerable hope.

Both the round 10 defeat against the Tigers by 41 points and the qualifying final last year by 47 were games in which the Lions completely torched their scoring opportunities, with tallies of 4.17 and 8.17.

Richmond, both this season and last, has ranked third in the AFL for fewest inside 50s conceded. But in each of those past two meetings, the Lions have been able to penetrate their forward arc well above the average number of entries the Tigers usually concede.

At the other end, Tom Lynch's absence is also big, allowing the returning Harris Andrews to form a tandem operation of sorts on Jack Riewoldt with teammate Darcy Gardiner.

Richmond has looked ominous over the past month, stars like Riewoldt, Dustin Martin and Trent Cotchin in particular. It goes without saying, the Lions need to curb them. Do that, kick straight, and they might be more than a sneak chance.

Oddly enough in what should be four pretty evenly-matched finals, St Kilda's 39-point win over the Bulldogs back in round two is actually the closest margin in the previous meetings of any of these clubs.

That was a decisive enough win. But the Bulldogs are travelling a lot better now, and their five wins from their last six games, plus a narrow loss to Geelong, have showcased their greatest strengths - tremendous midfield depth and a capacity for run and carry stemming from their attacking half-back line. St Kilda also has a capacity to generate plenty of run and gun out of defence. The result could well be the highest-scoring and most entertaining of this quadrella of finals games.

One important factor unique to this final is the venue, this being the only game played at a neutral ground. It's also one with which the Saints are more familiar and have fared better, with at least a 3-3 record there compared to the Bulldogs' one appearance for one loss.

The Dogs certainly have the better recent form. St Kilda will need to curb their ball-winning ability in the middle, stop their defensive rebound and create enough of its own in order to win a first final since beating the same opponent in the 2010 preliminary final.

The finals history between these two teams is rich indeed, obviously the classic grand final two years ago most remembered, but also taking in the Pies' win in extra time in Perth in 2007, not to mention a famous qualifying final draw in 1990.

Both the teams have been up against it much of the season in terms of injuries, but it's the home team which has by far the most encouraging news on that front in the lead-up to this knockout game.

While Steele Sidebottom's unavailability remains, the Pies have also officially drawn a line through Jeremy Howe, whose aerial talents would never have been more valuable than against the Eagles' forward line talls.

Collingwood has a fair record in "backs-to-the-wall road trip" scenarios but was completely taken apart by the Eagles back in round eight. To be any sort of chance this time, the Pies will need to keep this game tight, contested and low-scoring. Let the Eagles off the chain at all midfield, and it's all but over.