The gateway to the Kimberley region, Broome is wild, wide and wonderful. Natasha Dragun takes the pulse of this frontier town built on pearls.

It's dusk in Broome, and I'm eating oysters at the aptly named Sunset Bar & Grill. There's not a table free in the enormous establishment; nor on the grass stretching down from its doors towards Cable Beach.

The cacophony of the crowd wanes momentarily as the last of the day blazes into the Indian Ocean, then picks up in pace as the sky fades from orange into bruised purples and yellows.

If it wasn't for the drama of Mother Nature - she always seems to dial up the dazzle when you're somewhere particularly remote - I'd have never guessed this town in the north of Western Australia was one of the most isolated communities in the country. 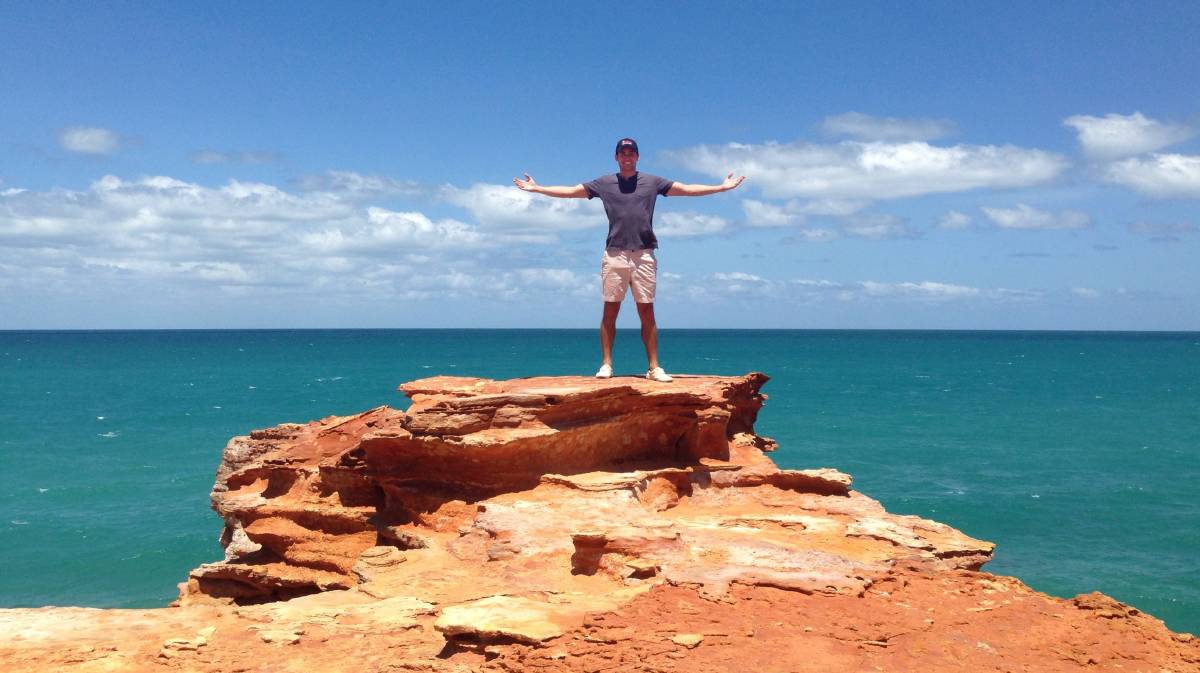 Over 2000 kilometres north of Perth, Broome's pace seems to mimic the ebb and flow of the surrounding pearl-studded sea.

The population swells during dry season (May to October), when travellers use the city as a base to explore the northwest corner of the country, including the vast Kimberley region. The local cuisine - such as this from Zanders - is mouthwatering. Picture: Supplied

And then reverts to hardy locals when steamy summer climes encroach, wrapping days in sizzling temperatures pierced with dramatic thunderstorms; the kind that keep you glued to your window in wonder.

Even in winter, it's hot. But somehow the sweat feels worth it - like a glistening medal rewarding its pilgrims.

From the moment the town was founded in the late 1800s, pilgrims are exactly what it attracted; this far-flung frontier was an instant magnet for those in search of something a little special. Riches, initially, and now a connection with nature and history in their most spectacular forms. Wander any street in Broome's shopping district and you'll see glossy reminders of what made this place so prosperous: pearls.

Their discovery off Australia's west coast heralded the arrival of dozens of luggers from Asia, bringing with them grifters and entrepreneurs - diving suits, bronze helmets and lead boots in tow.

Back then, the real allure was the oyster shell, or rather its mother of pearl lining.

"They say Broome was built on buttons, not pearls," says Bart Pigram, my guide for the morning.

I spent the previous day tracing this history, driving across vast swathes of empty countryside toward Willie Creek and its pearl farm, named after the nutrient-rich waterway.

Thousands of Australian South Sea Pearls are hatched here annually, and visitors have a front-row seat to the full production cycle, from shell to showroom: spawning, seeding and harvesting oysters, growing pearls, valuing them and turning them into jewellery. Kooljaman at Cape Leveque, owned by the Ardylaoon and Djarindjin communities, on the Dampier Peninsula north of Broome. Picture: Supplied

Of course, the region's history extends back long before pearls, with tens of thousands of years of occupancy by Yawuru people, like Bart Pigram who guides groups around his hometown and to significant Indigenous sites.

On one of his Narlijia Tours, we visit Reddell Beach, a gob-smackingly beautiful smudge of red pindan, white sand and intense turquoise ocean.

It's a short drive on to Gantheaume Point, where low tides reveal 120-million-year-old footprints thought to be from multiple species of dinosaurs including the tyrannosaurus and stegosaurus, with the immense sauropod leaving a sandstone print 1.7 metres long. Bart plucks wild saltbush for me to sample - "it's really good fried into chips" - and shows me around a vast midden overlooking Roebuck Bay.

The ground is covered in decomposing scallop and oyster shells, left as a reminder of what had been eaten by generations of Yawuru past.

"It's the earliest form of conservation," says Bart.

If a visiting mob saw previous campers had consumed one type of seafood, they'd eat something different, to ensure preservation of each species. Tucking in at Matsos. Picture: Supplied

My day with Bart ends at the Runway Bar and Restaurant, another place that doesn't mince words in its name: Broome's airport is in the city centre, and the bar's proximity to it means it feels like planes are about to land on your head.

First order of the day here is a Matso's beer, bottled a few metres from where we sit, in Australia's most remote brewery. You can sample these fizzy concoctions - infused with the likes of chilli, mango and ginger - at the source, touring the facilities then sitting down to a meal of Exmouth prawns paired with, say, a Pearlers Pale Ale or Kimberley Draught.

Chefs at Runway have been trained to prepare Bart's grandma's signature fish soup and rice. It's a dish that speaks of his part-Filipino heritage and is indicative of the city's immense multiculturalism - 57 languages are spoken.

Fragrant and full of flavourful surprises, the seafood stew is so delicious that my guide's dad, applauded musician Stephen Pigram, celebrated it in his song, "Going Back Home". I spent my first night in Broome admiring Cable Beach's glow from a distance - this afternoon I'm determined to get a closer perspective.

Cable Beach is so long that it has its own microcosms.

To the south, where russet dunes meet the sea, you'll find power exercisers and dog walkers; around the surf club gather swimmers and boardriders; further north are 4WD enthusiasts (beyond 'the rocks' is classified as a beach road) and camels, the latter forming a postcard-worthy sandy parade which I join at sunset. Continue on to find one of Australia's few nudist beaches - it reaches all the way to (eh-em) Willie Creek.

This coastline is beautiful, whatever time of day or year you visit. But it's particularly intoxicating when forces align to create the "Staircase to the Moon".

This natural phenomenon occurs on full moons between March and November - after the sun sets, lunar reflections appear in the exposed mudflats of Roebuck Bay, creating the optical illusion of a skyward stairway. My own journey to Roebuck Bay is to catch a glimpse of Australia's largest population of snubfin dolphins, recognised as a new species just 15 years ago.

These creatures are so intriguing that Sir David Attenborough filmed a 2017 documentary at Cape Villaret near their home in Roebuck Bay Marine Park.

This part of the coast, just south of Broome, also hosts a migratory population of 35,000 humpback whales, with sightings practically guaranteed between July and September each year. Then from September to April, more than half a million wader birds arrive, having flown some 11,000 kilometres non-stop from their breeding grounds in Siberia, North Asia and the Arctic Circle.

For me, it's not the ocean that causes cataclysmic life changes, but rather the stars. Astronomer Greg Quicke, nicknamed Space Gandalf, feels the same way.

His two-hour Astro Tours (April to October) are at once enlightening and inspiring.

"Amid the chaos, the stars and planets are regular and display an amazing synchronicity, harmony and resonance with each other," says the enthusiastic, white-bearded Quicke, who also loves surfing and meditating "in rhythm with the moon cycle".

Gazing skyward from my patch of bushland on the outskirts of town, there are no streetlights, no cars, no fluorescent hum from high-rise buildings. Just the sparkle of the night sky, enveloping Broome in a blanket of glitter. A Kooljaman experience on the Dampier Peninsula. Picture: Supplied

This rugged part of WA is about a three-hour drive by 4WD on an unsealed road from Broome.

The region is rich in Indigenous heritage and the local Aboriginal communities welcome visitors. At Kooljaman wilderness camp they offer cultural tours exploring bush foods and medicines as well as traditional hunting and fishing techniques, including mud crabbing.

Accommodation ranges from camping and beach shacks to safari tents with decks overlooking the sea.

But what's so magical is how untouched the Dampier Peninsula is - it's hard not to feel like the only person in the world. You can day trip from Broome or stay overnight (see kooljaman.com.au).

Fly: Qantas flies direct from Melbourne, Sydney or Perth to Broome, depending on the day you depart.

Stay: Kimberley Sands is Broome's most upscale adults-only accommodation. Rooms are lofty and light-filled, but the pick of the bunch is the Master Pearler Suite with its egg-shaped tub, kitchenette and lounge area. Another nearby option is the Cable Beach Club, where the resort's design mingles Broome's Asian and colonial influences. The multiple pools and Zen gardens are highlights.

Eat: Try the Cable Beach Club's Sunset Bar & Grill for fresh seafood and sparkling sunsets. The Aarli serves modern-Australian cuisine from breakfast through dinner - try the Feed Me three-course menu. The Zookeepers Store has some of the best breakfasts in Broome. Try Bart's ancestral fish stew at Runway Bar & Restaurant.