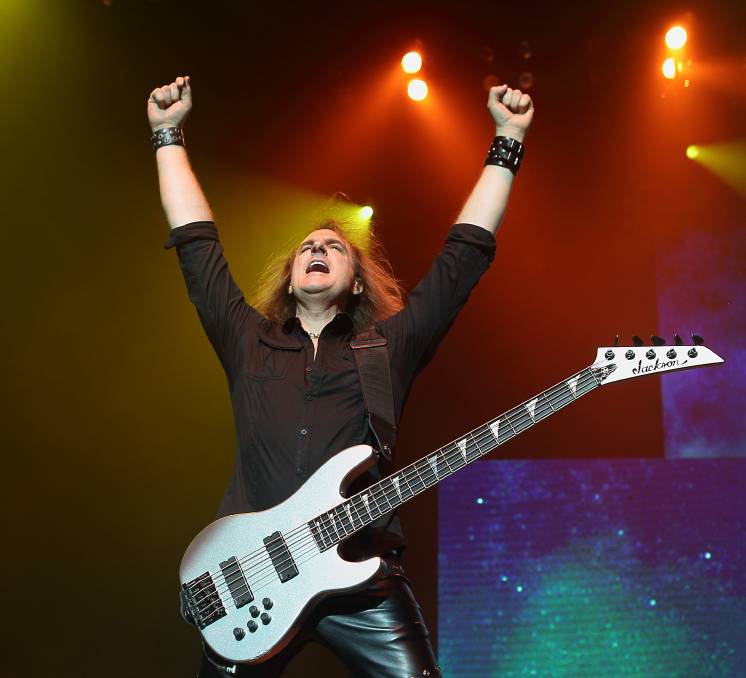 When recalling moments from his band's 30-plus year career, there are times Megadeth founding father David Ellefson feels as though he's reflecting on someone else's life.

Such is the distance traveled since he was summonsed to make a lifelong musical pact with guitarist and frontman Dave Mustaine.

Not only has the band amassed an impressive 50 million worldwide sales since its 1983 formation and become one of the most important acts in the history of American heavy metal music, but its members have experienced the vast extremes of rock excess ... at times, traveling to hell and back.

Ellefson, still proudly wielding bass for the band and balancing life as a husband and father of two, is on the eve of his first Australian spoken word tour, dubbed My Life With Deth.

''That does happen from time to time when I look back,'' he said. ''It's almost like, 'man this really does feel like another place in time or another guy'.

''In fact one of the biggest compliments I could get in my personal life is when I tell a story of doing heroin in Hollywood in 1987 and hanging with the guys and all the stuff that happens and people come up and go, 'God I can just never picture you doing that stuff'. To me that's a huge compliment. Number one, to know first of all I've changed, I'm not that same guy any more. The truth of it is man, we're supposed to grow up mature and move on to other things.''

Of course maturity and metal are not always - to coin a Megadeth lyrical notion - two words combined that always make a great deal of sense.

''I think that's the hardest part as an artist, because you grow up and you're music comes from within you, so as your outside experiences change, your inside motivations change,'' Ellefson said.

''It's always the hardest part when you come from a really heavy ripping band like Megadeth ...  we get older and grow up, our experiences change - we get married and we have kids - and naturally those experiences tend to soften you, and then you've got to go back in and write the most ripping record of your career. We've all taken heat for it for sure, but at the same time, I'd like to think that Megadeth, maybe more than some, has really tried to keep a purity to the energy.''

Ellefson has served two stints with Megadeth, the first from 1983 to 2002. He returned to the fold in 2010 to celebrate the 20th anniversary of the band's impressive Rust In Peace album.

He says it isn't hard to muster the old Ellefson musically.

''I feel it when me and Dave get in a room and put the guitars on,'' he said. ''It's like, 'dude we are right back'. Those roles were created in 1983 when we formed that band. I think that when he and I get back in the room together, you can feel that, 'God this is the root of Megadeth right here'.

''Other guitar players and drummers have come and gone and they've certainly affected the sound of the band - I'd like to think for the most part positively and constructively - but that core sound ... I noticed it the day that I came back and jammed with Dave and Shawn [Drover] and Chris [Broderick] in February 2010, when I rejoined the group. As soon as we played Symphony Of Destruction it was like, 'yep, there it is', and then it was, 'yep, let's go do this thing'. And here we are five years later, still rocking.''

The spoken word tour coincides with the 30th anniversary of the band's debut release, Killing Is My Business ... And Business Is Good.

From that initial blast of speedy thrash, Megadeth evolved into one of the most progressive acts on the global thrash metal scene, upping the ante on each subsequent release.

''Megadeth is one of those bands,'' Ellefson said. ''When I first met Dave, we formulated it before we formed it, meaning we really talked about everything; discussed it. It was a planned mission. It was like going to war. We didn't just walk in and start shooting some bullets and see if we hit anything ... this was a very, 'walk in and take over the beach', type plan. And that's how the band has been run since day one.

''Everything is intentional. Nothing is by accident - granted cool things come out of that. A lot of bands form in the garage or by jamming in clubs playing some tunes and then they find their way, but Megadeth was a much more deliberate approach and it's cool.

''As we were forming it it felt like some mightier power above us was calling the shots and directing it, and I don't mean that to sound necessarily religious, but you can tell when you're involved in things that are meant to be big ... this felt like that. I've been in bands that were great bands that never went anywhere and I've been in a band that really went some place and it's a great thing to be a part of.''

As far as pushing themselves, Ellefson admits, he and Mustaine are hard taskmasters.

''We're pretty hard on ourselves,'' he said. ''Things like when we write a riff, we'll go, 'nah, sounds too much like Ashes In Your Mouth, or we'll write a lyric and think, 'well we used that same lyric on something off of Youthanasia' ... we're really hard on ourselves to make sure we never repeat ourselves lyrically, musically, all that stuff ... so that has definitely kept everything to a very high standard and I think that type of approach has really kept the music fresh and keeps us from churning out the same kind of record time after time.

''Really, I think that's why we're here 32 years later having this conversation. We really try to set the bar high for ourselves.''

Ellefson agrees that the band's dedication and willingness to progress may have been its salvation during the 90s, a time when being in a heavy metal band was no easy ride.

Unlike some of their contemporaries, who faded completely, Megadeth pushed through, producing albums that stand the test of time, including Countdown To Extinction, Youthanasia and Cryptic Writings.

''When we formed the band and we had a mission statement - to be the utmost heavy, ultra-furious band ever,'' Ellefson said. ''One thing about mission statements, over time things start to change. The world changes around you and Megadeth is definitely a band that had to learn how to adapt.

''The 90s were absolutely brutal for thrash metal, the early 90s not so bad, but by the time Seattle music hit the scene ... MTV and the powers that be - radio and everything - they just turned metal off big time. All of it. Hair metal, thrash metal, any metal, gone. That's why for that reason I love this day and age. You can turn on the radio or you turn on TV and you see all different kind of videos. Here in North America we have VH1 and they play all the hair metal videos and it's fun.

''As funny as it was at the time, how thrash metal was a rival to hair metal, the fact that all metal is back and thriving and there's radio formats for it and that people have access to it is so cool because there were moments in the history of my lifetime, my career, in the 90s in particular, where different formats of music came in and really made it difficult for us to keeping doing what we were so passionate about with our bands.''

Ellefson said those doubting the longevity or popularity of heavy metal, need only look to the success of The Big Four concert series of 2010, which saw Megadeth hit the road with fellow thrash metal luminaries, Anthrax, Slayer and Metallica.

''Thrash metal was really this little bastard child that took a lot of blows early on for what we were doing and for the four of us to unite and create such a global force with our fans ... I can't think of another genre or four other bands ever, in the history of the world, that were able to come together on that level and make that big of a statement together,'' he said. ''That was an incredible moment in time.''

Of course there have been many well-documented band feuds over the years, perhaps none so famous in metal circles as that between Mustaine and his former Metallica bandmates.

Ellefson said that competition in the metal scene was very real.

''It was pretty competitive and the thing is, it was not only competitive just between the bands, but it was competitive between the sub-genres - hair metal didn't like thrash metal ... didn't like this metal and that metal ... and then death metal came, and that was like, 'oh that's too heavy metal. There was a lot of infighting and I guess that's kind of the cool thing, because that's sort of all pushed through now here we are all those years later.

When it comes to pinpointing career highlights, Ellefson says there are a few obvious standouts.

''Countdown To Extinction was a really amazing moment because of the synergy and collective creativity of the group,'' he said. ''Some would say Clash of the Titans 1991 - the fans, that's probably one of their favourite moments because everything was so on fire for Megadeth and the scene.

''Every record has brought about different things. Cryptic Writings was sort of this new beginning that was great and really saw this huge rebirth around the world at a very difficult time in heavy metal. Megadeth was thriving, I mean really thriving. And then again, 2010 when I came back to the band was like, 'wow dude, we get a second chance, we really get a second chance', and that was an unbelievably great moment to have that happen.

''I can't say there has been one [highlight], which is probably why this spoken word tour will probably go on all night. There's so many moments.''

David Ellefson's My Life With Deth will be staged at The Factory Theatre, Sydney on Thursday, March 26.

Discuss "Ellefson reflects on a mega life in Deth"

Discuss "Ellefson reflects on a mega life in Deth"